I welcomed HMRC's adoption of country-by-country reporting yesterday, and am very unlikely to change my mind on that issue.

However, Joe Stead of Christian Aid did draw my attention to two issues in its announcement worth sharing more widely. The first is its impact assessment on the costs it thinks business will incur in complying with country-by-country reporting, which is as follows: 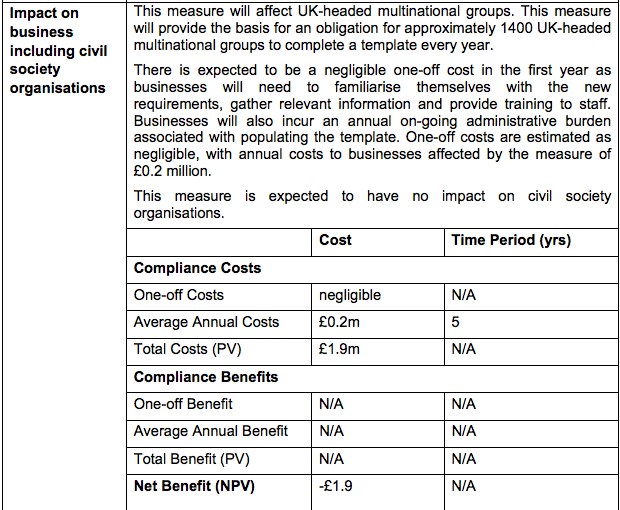 HMRC obviously believes what I have always said, which is that business already has all the data needed for country-by-country reporting and the additional costs will, as a result, be negligible.

That said, I think that their suggestion that country-by-country reporting will have negligible impact on NGOs is technically right in the sense that none will have to report it to HMRC, but totally wrong given that this issue will remain the focus of a great deal of their attention.

The key issue here relates to responding to information exchange requests. Why should these arise, after all, with regard to country-by-country reporting? Surely the implication of country-by-country reporting should be that this data should be supplied to all countries impacted by the activities of the multinational corporation making the report so that each has an opportunity to appraise whether or not that group, as a whole, is profit shifting into or out of its country? That has been the demand made by NGOs at the OECD (I know: I helped make them) and in fairness that has been supported by the likes of Will Morris from the CBI at the OECD as well. If happened there would be no need for information exchange.

But the Big 4 accountants and their clients have argued that this data is far too sensitive to be given to all tax authorities and have instead suggested that it should only go to parent company tax authorities with other countries having the chance to access the data if they have double tax agreements with that parent company location. The implication of this cost assessment from HMRC is that this is what they expect to happen.

In that case it is quite clearly the case that the OECD will be failing to deliver country-by-country reporting for developing countries, who were always intended to be one of its main beneficiaries, since many of them do not have double tax agreements with countries like the UK and so will not be able to access this crucial data and so collect the tax owing to them.

If true this is absurd and a straightforward insult to the integrity and expectations of the countries that will be impacted. I am meeting Pascal St-Amans, the head of tax at the OECD, in Copenhagen tomorrow. He may be the recipient of some forthright opinion from me on this issue if he confirms that this is now the expectation.