If tax havens create prosperity why can’t 1 in 10 in Jersey afford a cooked meal every day? 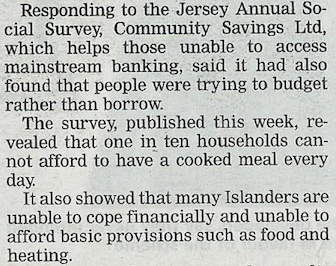 So what does that say?

First, in a tax haven there are those unable to access banking.

Second, that many of those who cannot access banking there are suffering very real hardship indeed.

So, in a tax haven that supposedly has one of the highest incomes per head in the world there is very real poverty. And the income of the island does not, of course, trickle down to alleviate their need.

I know from stories I hear that poverty is a very real phenomena in Jersey. And I'll be honest, I think that it has a government that really does not care about that poverty or the contribution that the abuse that they permit makes to poverty in the island and around the world because in places like Jersey the only thing that matters to the people in power is themselves and their bank balances. At a very basic level that is a definition of corruption and it is writ large all over that lovely island.