I've already noted concern about the devolution of tax powers to Scotland this morning: now we have the detail on what has been written on Scottish income tax devolution by the Smith Commission, which is this:

And this is what the report says on the crucial issue of income tax.

Income Tax will remain a shared tax and both the UK and Scottish Parliaments will share control of Income Tax. MPs representing constituencies across the whole of the UK will continue to decide the UK’s Budget, including Income Tax.

Within this framework, the Scottish Parliament will have the power to set the rates of Income Tax and the thresholds at which these are paid for the non-savings and non-dividend income of Scottish taxpayers (as defined by the Scotland Acts).

As part of this, there will be no restrictions on the thresholds or rates the Scottish Parliament can set. All other aspects of Income Tax will remain reserved to the UK Parliament, including the imposition of the annual charge to Income Tax, the personal allowance, the taxation of savings and dividend income, the ability to introduce and amend tax reliefs and the definition of income.

The Scottish Government will receive all Income Tax paid by Scottish taxpayers on their non-savings and non-dividend income with a corresponding adjustment in the block grant received from the UK Government, in line with the funding principles set out in paragraph 95.

Given that Income Tax will still apply on a UK-wide basis, albeit with different rates and thresholds in Scotland, it will continue to be collected and administered by HMRC. In line with the approach taken for the Scottish rate of Income Tax, the Scottish Government will reimburse the UK Government for additional costs arising as a result of the implementation and administration of the Income Tax powers described above.

We also know the following, lifted straight from the Commission report: 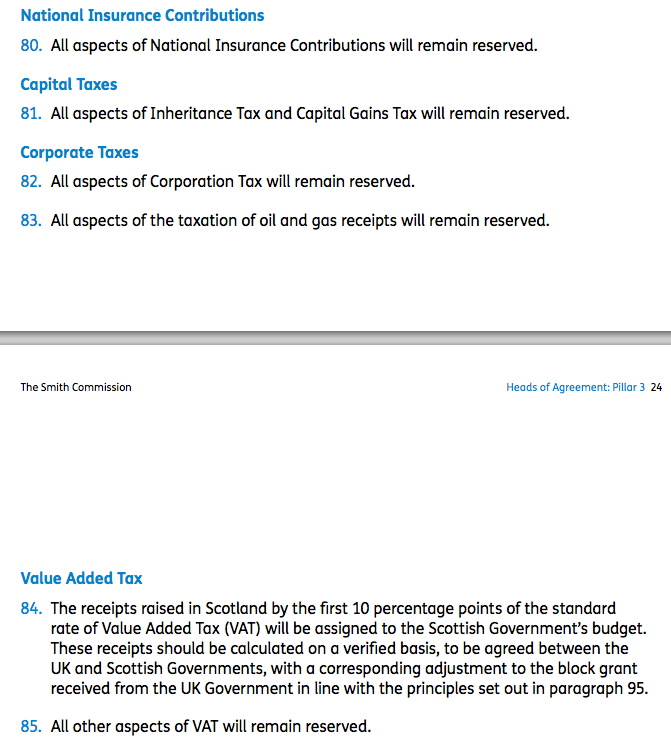 So, income tax apart and maybe £2.5 billion (my best estimate) of VAT receipts all tax remains under UK control.  Let's then consider this issue in its broader context, concentrating on income tax.

First, note that a power granted by Westminster is to be paid for by Scotland: there is no price tag attached. I hope someone has discussed the charging mechanism because this is a transfer pricing issue of the first order that could become very messy indeed.

Second, there is no control over key aspects of income tax - and most especially tax on savings income and dividends which may be key to any goal Scotland might have to redistribute income and wealth. Without control of capital gains tax and inheritance tax the political control of the Scottish parliament on the crucial issue of inequality is extremely limited by this.

Third, thankfully, there will be no race to the bottom on corporation tax.

Fourth, the Scots get no control of oil revenue. So much for devo-max.

Fifth, effectively the devolved power is only to set rates. Tax cannot be sued by the Scottish government to encourage investment, encourage or discourage any activity it thinks desirable or undesirable, and no changes in rules relating to any aspect of what is taxable can be discussed. To call this control of tax is in that case an insult: it's like being given a bicycle without the pedals, chain or brake and being told you're in full control when you have actually got no power to literally power the economy as a result, or drive its direction or brake what you think inappropriate.

And despite NIC being a tax in all but name that has significant economic impact, and heavy impact on the low paid, Scotland is denied any chance to control that either.

So what have we got here? We have rates devolved and little more. This is political spin without real consequence: it is little more than a minor re-writing of the Barnett formula, as the VAT note concedes. And yet at the same time there is macro-economic loss of control of the currency at a UK level and a borrowing formula with Scotland that is at present hard to fathom as to consequence.

So what have we got? A half baked tax devolution with almost no chance it can deliver any tax reform to create increased well being and employment in Scotland but which gives the pro-English faction every chance to beat Scotland down. It is, as I said before, a worst outcome and one that the people of Scotland will rumble as being not in the least in their interests very quickly. This issue has not been resolved by a long way as yet.