HMRC held this service on Tuesday: 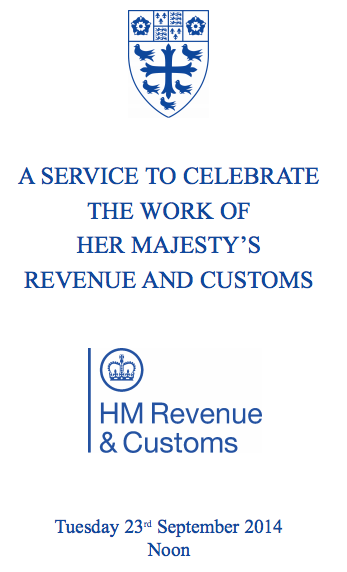 I am a Quaker and Christian, plus occasional Anglican. I think this service was deeply inappropriate.

I can find no hint of multi-faith (and no faith) elements within the liturgy.

Being pedantic (if you wish) the choice of hymns was not good (and I am the son of a church pianist who brought me up on what she called Hymns, Ancient and Mouldy).

I hope the testimonials were good, but as it is it worries me that so many seemed to be offered by senior staff, as were far too many of the intercessions whilst the readings have all too strong an impression of a mild worship of neoliberalism within them.

I'm trying hard to find a redeeming feature. I am really struggling. So, the best I can offer is this prayer:

That made me think. I thought about those fighting for tax justice. The NGOs. The faith organisations. The campaigners. The people who believe tax is the way to a better world. And, quite often, the trade unions who represent them. All of them have, in my experience been ignored, chastised or just dismissed as muddled, confused or wrong in the last decade by HMRC.

HMRC, take note, I suggest. If you did and changed your attitude to towards those engaged in tax justice then this service might have been worthwhile. But it requires an act of faith on my part to think so.