An independent Scotland will have to charge 5% VAT on food

A comment on this blog has made me look at a key issue for the people of Scotland post independence. This is the impact of VAT on the cost of living in Scotland if there is a Yes vote this week.

The summary of the story that follows is that if Scotland votes for independence and then applies for EU membership (as seems to be the plan at page 216, here) then the people of Scotland need to be braced for a shock because as a matter of fact VAT at a rate of at least 5% will need to be charged on such basic things as food, water and health care (if paid for). In fairness, VAT on some things (like the cost of entertainment) could fall, but that's hardly likely to impact on people's cost of living as much as VAT on food at a rate of at least 5% would do. As a matter of fact then when food retailers say the cost  of living in an independent Scotland will increase I think they are telling what seems like an inevitable truth.

My starting point for this exercise was to look at what the Scottish government said on VAT in its white paper on the future of Scotland. It helps that there aren't many, so I can reproduce the few significant ones that there are. The first is this, which implies Scotland would have some control over its future tax rates:

Then there is this explicit reference in the Q&A section: 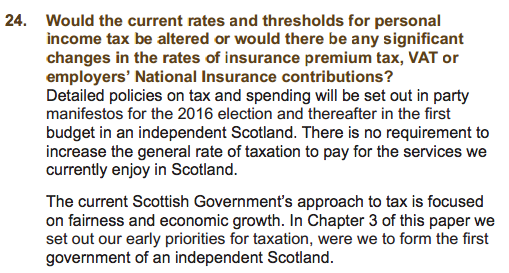 There is no mention made of any change to VAT rates in the answer provided. Nor is there in this next, rather specific, question on an issue which, along with airline passenger duty and its interaction with VAT, appears to be of some significance in the White Paper: 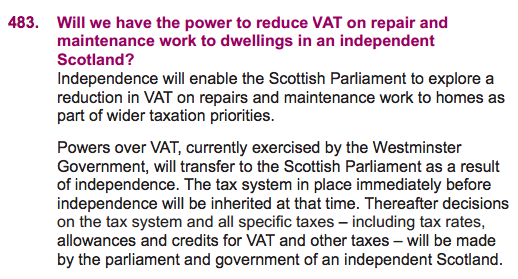 It has to be said that the second part of this answer is, with regard to VAT, in my opinion straightforwardly wrong. VAT is an EU regulated tax, and it is simply not possible for Scotland to claim that it would have control over VAT rates in the event that it applies for EU membership because VAT rates are now quite strictly regulated within member states. This is especially true for new member states, as Scotland will be.

The rules, as in most things relating to the EU, are included in Directive, in this case Council Directive 2006/112/EC of 28 November 2006. This is a hefty document of 118 pages, and has to be reflected in the domestic law of member states barring the fact that some member states are granted exemptions (derogations in EU language) for tax rates and allowances agreed before the current regulations came into effect. This includes the existence of the UK's zero rate of VAT, including on food. There is, however, no provision to transfer this derogation. It will lapse if Scotland leaves the UK.

In that case the basic requirement of this Directive is stated in Article 29, which says that the lowest standard rate of VAT allowed in a member state is 15%.

Article 98 then allows any member state to have up to two reduced rates of VAT that can be applied to a range of goods and services specified in Annex III (reproduced at the end of this blog). Food is on the list of reduced rate items, but there's a sting in the tale because Article 99 says:

The reduced rates shall be fixed as a percentage of the taxable amount, which may not be less than 5%

There is no way that Scotland will be able to get round this: this is EU law and I do not think there is any way that it will be varied for Scotland. So, as I said at the outset, Scottish people will, as  a matter of fact, see the price of a great many of their foodstuffs increase by at least 5% in an independent Scotland if, as expected, it applied to join the EU. Unfortunately the Scottish government white paper on this issue does not make this clear. That's why I have done so here because the fact is that an important issue in the Scottish independence debate has not been discussed. There are a couple of days left where it should, I think, be on the agenda.

I stress: that discussion need not be negative: the VAT that would have to be charged. Based on HMRC data I estimate that the tax in question would raise about £300 million or about £1 per person per week in Scotland. Being more precise is not possible. The question in that case is not whether or how the tax in question would happen, because I think that inevitable, but how the money raised will be used. If this was used for redistribution purposes e.g. to increase benefits, to abolish the bedroom tax and to increase pensions, then, as is Scandinavia (where such taxes are charged), this could be redistributive to the positive benefit of those hardest hit. This then could be a clear message for many in Scotland about how a new society could be built. But what is not possible is to ignore this issue. As a matter of fact it is one that has , I think, to be addressed.

Finally, this is the list of items to which reduced VAT rates may apply in EU law: 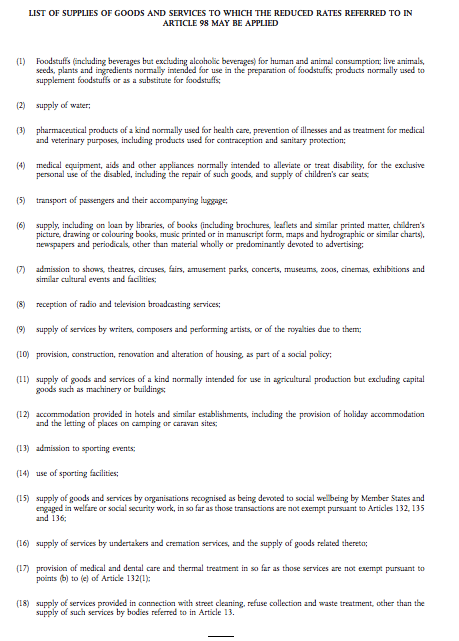