This chart comes from a National Audit Office publication issued today as a result of their review of HMRC's 2013-14 accounts. I cannot as yet find either document on line: I was sent the report by the NAO. 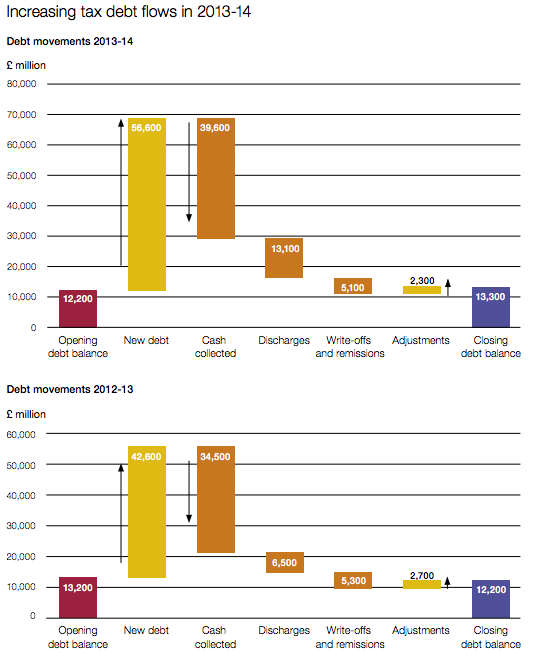 What the chart shows is the movement in HMRC debt during the year. There are a number of things to note here.

First, most tax is never considered debt: the money is paid on time. The amount of debt did, however, rise by almost 33% in a year. That's a significant increase. It is not clear why this is the case, although part may be because PAYE debt is now realised to exist sooner than before according to notes in the report. More likely, much of this is simple mistake, for reasons noted below.

Whilst debt recognition went up by 33% cash recovered only increased by 14.7%.

Despite that closing debt only increased slightly. Why? Note that figure for discharges that increased by £6.6 billion - or over 100% in a year - to £13.1 billion. Of this sum the NAO report says:

Discharged debt is where HMRC amends or cancels a debt as further information is received that determines the taxpayer’s ï¬nal liability as being lower than the originally estimated ï¬gure.

There are are at least four dimensions to this to worry about. First, this implies there could be much more estimated debt in the system. That is worrying. Either returns are not being received or, as likely, estimates are being prepared to protect positions when there has been insufficient time for HMRC to do their job properly.

Second, the discharges are 23.1% of all debt created. If this debt should not have been created in the first place that is a staggering rate of error. I suspect much of it comes down to there being insufficient resources to get debt estimates right in the first place.

Third, HMRC is seeking powers to recover debt direct form people's bank accounts. This data implies that this is a misplaced power if HMRC gets so much debt wrong in the first place.

Last (for now), HMRC claims to have debt, as a closing balance, and as bad debt written off (the figure that goes into the tax gap) under control. I candidly doubt this. We have no way of knowing how much of the discharge could also be bad debt. I'm inclined to think that the tax gap is seriously understated as a result, especially when this is an IT system that also requires £2.3 billion of manual adjustments to make the books balance.

There are four things that this implies.

Second, HMRC is not able to properly estimate tax due.

Third, it is likely that HMRC seriously under-estimates the tax gap.

The answer in all cases is better management, more money spent, better systems and better attention to detail.

I hope Margaret Hodge takes this up in her hearing on this on 16 July. And yes, I am sending her this blog.