The ICAEW published a new report entitled 'Taxing corporate profits - hard choices' in the last few days before Christmas, when almost no-one was going to notice it. To assist their PR, and because I was sent a copy with request for comment, I think it quite fair to reproduce the summary here (with apologies for the format; the original document appears to be encrypted to prevent copying): 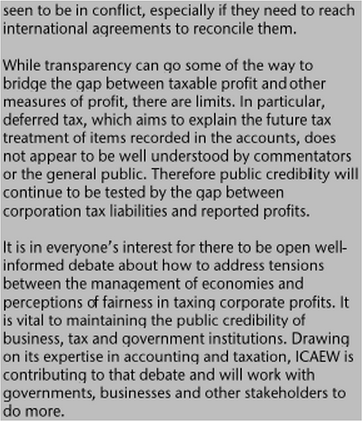 I'd love to say that this document (of which then above is a fair summary) is a valuable contribution to debate on this issue, but it isn't. There are a number of good reasons for saying so, all of them because as an exercise in obfuscation this document ranks amongst the best.

Firstly, it is very hard to see how the ICAEW could put out a paper on this issue and miss the two main issues that are subject to discussion. Everyone knows that companies can and do take advantage of tax incentives and as far as I am aware no one anywhere is criticising them for doing so when and if the claims they make for the allowances and reliefs they undertake still result in them paying the right amount of tax (but no more), at the right rate, in the right place and at the right time where right means that the economic substance of the transactions undertaken coincides with the place and form in which they are reported for taxation purposes.

The issue is not with these allowances and reliefs, as the ICAEW clearly wishes to portray this matter. The problem is that all over the world multinational corporations are not seeking to pay tax in the way I have just noted. They are instead seeking to shift their profits artificially to locations which have little or nothing to do with the economic substance of the transactions that those companies undertake but which do provide them with the means to record profits they can attribute to those places at lower tax rates than would be paid in the places where the profits really arise. The world's tax authorities, politicians and regulators from the G20 downwards have realised this and the OECD's Base Erosion and Profits Shifting project is wholly focussed on this issue - not least because of the evidence arising from the Google, Starbucks and Amazon cases - and for the ICEW to ignore this obvious truth and to instead pretend that the whole problem does instead relate to the claiming of legitimate allowances and reliefs undermines any claim to credibility it might have on this issue.

The second problem with what the ICAEW have to say is that they deny that transparency can offer any significant solution to this problem. This is, again, quite extraordinary. Around the world it is now appreciated that country-by-country reporting has a major contribution to make in identifying which companies may, or may not be shifting profits into tax haven locations. That is why the G20 and G8 have endorsed this idea (which in the interests of full disclosure I have to mention I created). But the  ICAEW completely ignores it. That's unsurprising: the ICAEW seems determined to oppose progress on that issue, echoing calls from Big 4 accounting firms on the subject, all of whom are opposed to it precisely because it would undermine their lucrative tax haven markets, in which they all operate. In addition, the ICAEW offers no other insight into how tax reporting might be improved to overcome the misconceptions that are occurring, in their view. They simply offer 'debate', which is the perennial defence of those seeking more time in the hope that an idea might go away.

The reality is then that what is needed is tax disclosure in accounts that makes very clear where profits are earned and what tax is paid on them and where and why, if that rate is not the one expected, that might be the case. In the process the objective is straightforward: it to differentiate low tax rates caused by legitimate tax reliefs from low tax rates created by tax abuse, including the use of tax havens. This is entirely possible. It could be done by combining country-by-country reporting with enhanced tax reporting.

Country-by-country reporting is not, of course, just about reporting profit and taxes. It is also about reporting turnover on both a source and destination basis and on a third party and intra-group basis. It is also about reporting labour costs and headcount by country and reporting tangible asset investment in each jurisdiction. In this way country-by-country reporting provides indication of the real likely location of the drivers of profit in most enterprises, because these are the only factors that can do that (note: intangible assets do not do so; they are a legal protection for the product of human and tangible capital that protect the right to sales revenues meaning all value added derived from them is reflected in the three core drivers already noted). As such this data is vital to ensure that any user of the accounts can see if profit is allocated in ways that reflect underlying economic reality or not: that's the first test of paying tax in the right place.

Then there's the test of tax rate. This is dependent on publishing a tax charge reconciliation for each state. Every company actually does this for every state in which it works: if it does not it should sack its tax director, so publishing it is no big deal. This is the way to prove that low tax rates relate to legitimate tax deductions, and narrative notes have to be provided in the accounts to prove this if necessary.

And then there's timing. That means deferred tax has to be reported by state, including an estimate of when (and if) that tax might ever be due. This is not beyond the whit of accountants; it is just very clearly beyond their current willingness.

So transparency can solve this issue. We could know who is paying low taxes because they are abusing and who is doing so because they're investing.

But instead of saying this the ICAEW has set up a deliberate straw man, stating the problem to be one that does not exist and saying solutions within accountancy are not available when they clearly are.

If the ICAEW wants to be credible it has to do much better than this. If not, it has to expect to be by-passed in the debate on what to do, and it will be. The choice is theirs to make: own up to the nature of the problem that exists and how it might be dealt with or simply look like an apologist for the abuse. At present it looks pretty clear which way they're jumping. I hope they change their tune, and soon.