I have posted HMRC's response to the Public Accounts Committee on this blog this morning: it seemed only fair to do so.

That said, I think the defence offered is mildly absurd. Let me deal with the one issue of tax avoidance now; time is pressing pre-Christmas.

First let's remember what HMRC say themselves about the value of the tax avoidance gap: 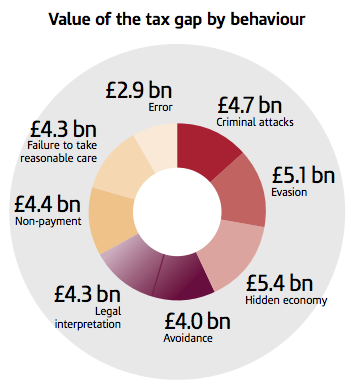 They say it is £4 billion. If we're generous and add in legal interpretation it is £8.3 billion -  but I don't think they do mean us to do that; I will, none the less.

And now let's look at what they say in their press release:

We have secured more than £50 billion of additional tax from our compliance work since 2010, including £23 billion from large businesses. We have carried out 2,345 prosecutions for tax evasion in the last three years, including of high-profile accountants and lawyers, have halved the number of disclosed tax avoidance schemes and have protected more than £2.4 billion from marketed tax avoidance schemes this year alone.

We do not hesitate to take large businesses to court if necessary to secure the tax they owe and would consider prosecution in any case where we suspect that we have been misled or information had been withheld from us. We secured eight court wins against large businesses in the first half of this year alone, protecting over £1 billion of tax from avoidance.

That's a confusing array of numbers. Assuming large business does not tax evade (and I do make that assumption, in the UK) then in 3.5 years HMRC says they have collected just over £6.5 billion a year from tackling tax avoidance and related issues in big business. This year already they've closed down £3.4 billion of avoidance, at least. And yes, I know they claim they state the avoidance figure in the tax gap net of recovery, but despite that it's just £4 billion (maybe £8.3 billion) in total last year. The previous year it was £5 billion of avoidance and £4 billion of legal interpretation. So, in total, their pool to target in 2013 was, at a maximum, across all businesses and all individuals, £9 billion last year.

And, amazingly, they say they closed at least £6.5 billion of that in the case of big business alone - where according to them the total tax gap across all issues was £8.8 billion in 2013 (there is no equivalent data for earlier years; we'll have to assume it is broadly similar), a figure that includes mistake and neglect and other such activity as well as avoidance : 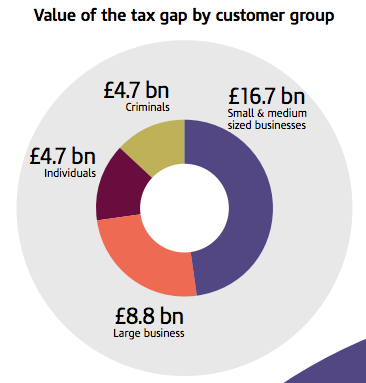 Let's be clear, if that's true, what HMRC do is truly amazing. There is always a time lag in dealing with tax issues. So I think it is quite fair to suggest that a figure for one year's tax gap is the capacity for collection in a following year.  And what HMRC are trying to tell us is basically that year in year out they collect (based on this data) 74% of the big business tax gap in avoidance alone. Taking other factors into account that must mean that each year they must collect, on the basis of their data, at least 100% of the previous year's big business tax gap the following year.

I should be impressed.

These numbers are not credible.

They're not credible because if they were right then 100% collection would mean that the problems had been solved; in particular the the legal disputes had all been resolved. But that very obviously does not happen. And yet each year HMRC would have us believe that is the case. And if, as is very likely, some of that figure for avoidance and legal dispute relates to individuals then they'd actually have us believe that they collect considerably more from their efforts in closing the big business tax gap each year than was identified in the previous year.

I have to simply say that is not credible. I am not disputing the work done by HMRC to challenge the tax gap: I know HMRC staff do sterling work to tackle this issue and I applaud their efforts despite the lack of resources they are given to do the essential job they do. But however good they are they do not close the tax gap, or more, each year, only for it to open again. No one can believe that possible.

There is only one plausible possible explanation then as to why HMRC can be so successful at recovering tax owing - and that is that the tax gap is much bigger than HMRC admit it to be. That has to be the case.Of course it is fluid, and of course because tax is in effect time series data the pool of abuse to tackle can be and will be topped up over time, but there is no way on earth HMRC are 100% or more successful every year in tackling big business abuse, let alone in any other sector, but that claim is implicit in their data and that is just not credible.