Vodafone: an exercise in wildly missing the mark with selective tax PR

Vodafone published a statement on its tax affairs yesterday. It was robust and defiant. And it was a PR disaster.

As Channel 4 said about it:

Vodafone paid no corporation tax and reduced its UK tax bill by a fifth last year. The company defends its arrangements in a 3,600 word statement that Channel 4 News hears is "smoke and mirrors".

For the third year in a row, Vodafone paid no corporation tax in the UK.

But as they added:

This time, the telecoms company announced its affairs in a long statement with a handy "in focus" box entitled: "Why does Vodafone pay little or no UK corporation tax?"

Vodafone said that critics failed to understand the complexities of the tax system, and said: "tax law is often unclear and subject to a broad range of interpretations". The statement pointed to the £1bn of investment in the UK and to the £600m a year of UK borrowings, which can be claimed for tax relief.

And then, they noted me saying:

However accountant and tax campaigner Richard Murphy said the 3,654 word statement was purely "smoke and mirrors", and was "patronising" to the British public in leaving out crucial information – including profits.

"Without knowing what the profit is, Vodafone is giving us an incomplete view, or at least, a very selective view," he told Channel 4 News.

"Alistair Campbell would be proud – this is pure spin."

He added: "They have written very long excuse for their behaviour. The moment I read it, I thought I could just hear Margaret Hodge (chairman of the public accounts committee) sighing."

Let me expand on that. This is what Vodafone actually report: 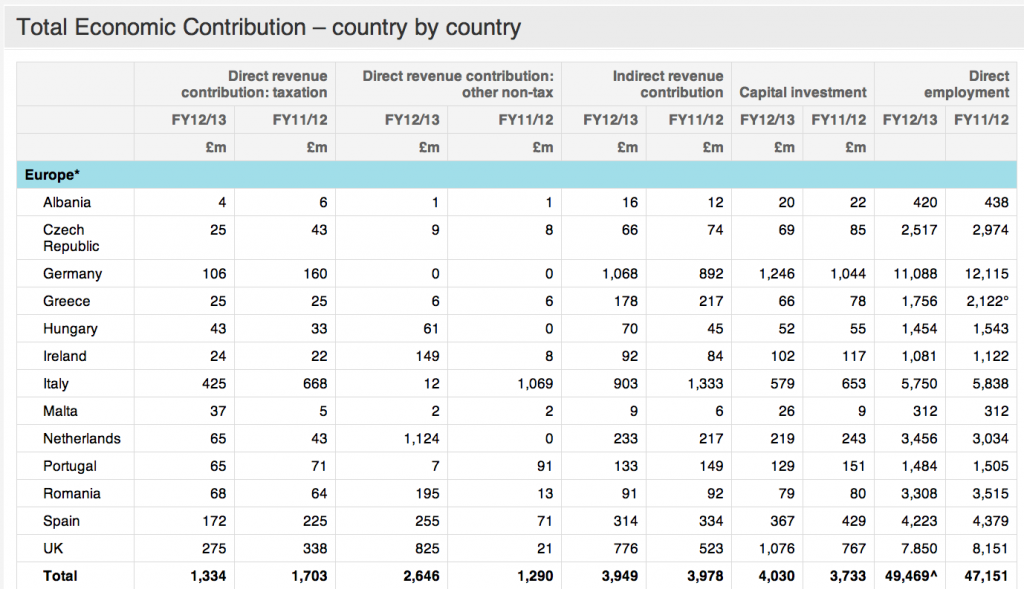 The problem with this supposed 'accounting' for tax is that it is not in a very real sense accounting at all. It is disclosure of what has been paid, but that's something different. In accounting data what is provided lets is interpret the data for ourselves. So, for example, to understand tax paid on profits we need to know what the profit is, and to understand VAT paid we need to know want sales are, and so on. Vodafone does not tell us that and in that case this data is curious and vaguely interesting as time series information, maybe, but this is not country-by-country reporting, whatever Vodafone might say, and second this is not helping use very much. It's PR, but it's decidedly selective PR and that's of no use to us at all.

The long text documents issued by Vodafone are as bad. They sound like an aggressive defence of the indefensible, because they are just that. Candidly, they're also seriously misleading.

For example, Vodafone says it does not pay tax in the UK because of interest paid. It fails to mention it may have significant borrowings in the UK that may not relate entirely to its UK operations because the Uk is remarkably generous with its tax relief on interest. Nor does it say where that interest is paid to.

And it says it only locates business where there is commercial substance to what happens but then admits it is in Luxembourg to claim the tax relief that Luxembourg permits on the writing down of the value of investments that is rare in Europe, coupled with the fact that it can easily shift profits from its European operations into Luxembourg via interest paid to mop up the tax relief available there and avoid paying tax on a significant part of its income as a result, in all likelihood. But so incomplete is Vodafone's supposed country-by-country reporting that they don't disclose figures for Luxembourg so that part of the story is hidden from view!

It is, perhaps, that last point that reveals most tellingly the farce in this PR exercise. Whilst Vodafone clearly admits it has a problem with its PR image and tax in Luxembourg it won't give us the data to work out what is going on there. So what has it got to hide? That's the very obvious question that follows on from that.

Until we get full trading data for each country and full details of how and why tax is paid in each place where Vodafone operates and how that is impacted by its intra-group trading - data that full country-by-country reporting would provide - then exercises like this will back-fire on the groups that do them.

We have a long way to go on tax disclosure is the message of the day.