I have long argued that the UK does far too little to tackle tax evasion. It's good to note that the OECD now agree. As the Guardian reports this morning:

The world's richest countries are failing to deliver on their pledges to crack down on money laundering and tax evasion, which drains billions of dollars from poor countries, a report said on Wednesday.

The damning assessment from the Organisation for Economic Co-operation and Development (OECD), a group of 34 countries, comes despite tough rhetoric on illicit financial flows from leaders of the G8 group of industrialised countries, particularly the British prime minister David Cameron.

The report does not, as yet, appear to be on the OECD web site but I have a copy and the evidence is damning. So too is the fact that the OECD have now given up arguing on the exact scale of the flows (the NGO community has won the argument that they are huge and damaging; a campaign in which my work has played a part) and has instead agreed that now is the time for action. The foreword to the report says:

The issue of illicit financial flows (IFFS) is at the forefront of the international agenda. Governments worldwide are joining forces to combat money laundering, tax evasion and international bribery, which make up the bulk of IFFs. Although the exact scale of the problem is unknown, IFFs have devastating effects on developing countries. Instead of attempting to quantify precisely what is by definition a hidden activity, now is the time to determine where public funds should best be targeted to make the most impact.

The evidence of inaction is compelling. A state that was doing well on this issue would have complied with the requirements of the Financial Action Task Force on the issue (although there is room for improvement still in their standards). This is the table of success as reported by the OECD today on one key issue of concern to me - which is customer identification and beneficial ownership determination by banks, both of which are key to tackling tax evasion: 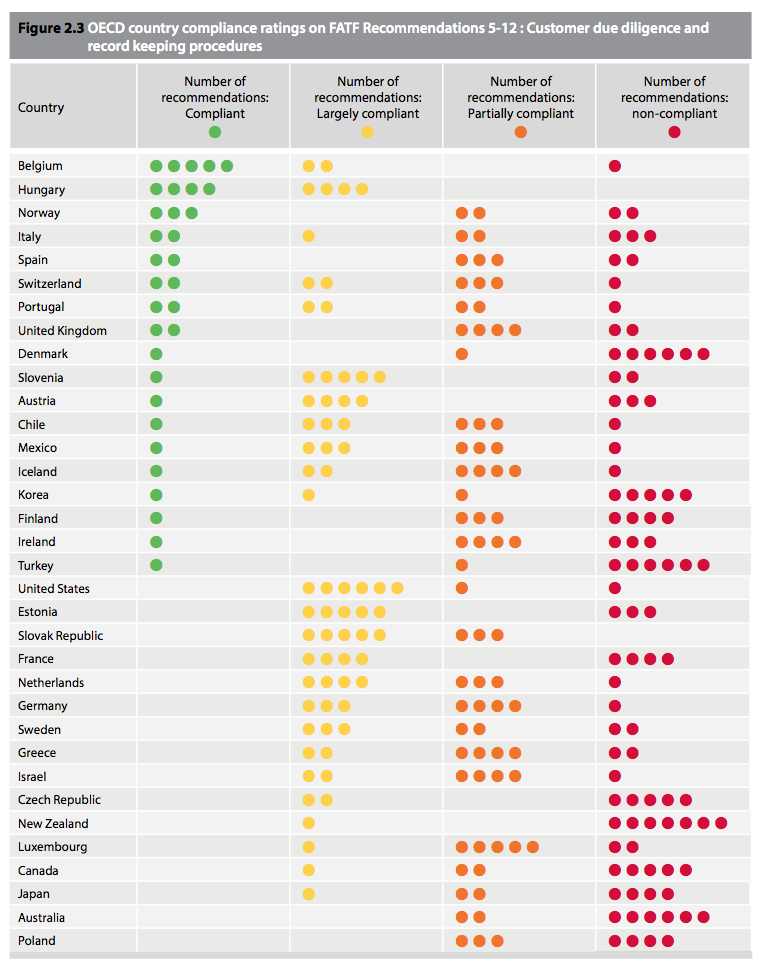 The overwhelming message is of non-compliance, and the UK cannot be smug because it gets a couple of compliant credits. As the report says (page 12):

The pathetic consequence is:

As of 2012, 221 individuals and 90 companies have been sanctioned for foreign bribery, yet around half of all OECD countries have yet to see a single prosecution.

I have, of course, proposed legislation to tackle this issue with Michael Meacher MP. The government opposed it. And so we remain in a criminogenic environment where the reality of the problem that tax evasion creates is denied by the government. Margaret Hodge MP was right to say HMRC only recognise the tip of the iceberg on this issue. But now we have to recognise that the consequence of that failure is not just here in the UK - where it is enormous - but worldwide. And we have to ask, I am afraid, whether or not that is deliberate. But that's another blog.