The last thing I expected when starting work on tax abuse was public recognition for that work. If I had then I would have been seriously mistaken: for a long time the work was largely ignored or ridiculed, but that, I admit, is no longer the case. Nonetheless I will admit to surprise at public recognition of my work that’s been published today.

International Tax Review (ITR) is one of the two leading publications on international tax in my opinion (the other being Tax Notes International, in whose year end edition I will have an article). ITR have published a ‘top 50’ in global tax for the last three years. Last year I appeared in that top 50 alongside the Tax Justice Network director, John Christensen. This year I have been promoted to number 7 on the ITR list of the most influential people in UK tax. 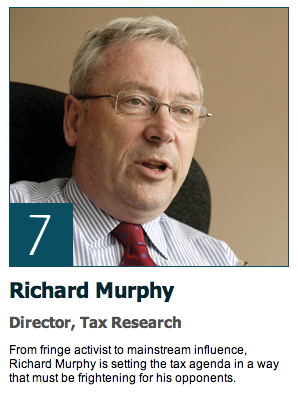 The supporting commentary in ITR says:

Stalwart campaigner Richard Murphy has been a thorn in the side of tax avoiders everywhere for more than a decade. But this year has seen Murphy go from an activist exposing the ills of the global tax system to a mainstream influence on its direction. First they ignore you, then they laugh at you, then they fight you, then you win.

Murphy is the architect of country-by-country reporting (CBCR) and his most significant achievement came this year when the G8 and OECD endorsed a form of CBCR.

"Country-by-country reporting has crossed the Rubicon," Murphy says. "We now have the OECD saying it will happen."

Murphy has been advising Margaret Hodge of the Public Accounts Committee in her interrogations of multinational companies' tax affairs. His work on the UK tax gap has showed HM Revenue & Customs' estimates may just be the tip of the iceberg. He has written two Bills for Labour member of Parliament Michael Meacher. He advised on the general anti-abuse rule. And he helped prevent the devolution of corporate tax powers to Northern Ireland, which could have seen the country join its southern neighbour in a race to the bottom.

In August, Murphy split from the Tax Justice Network, which he co-founded, so that he could concentrate on different projects, but with his tireless work over the past decade finally coming to fruition, he has been propelled into the top 10 most influential people in tax.

I’m grateful to them, but want to say immediately that this is, inevitably an award that also recognises the work of thousands of others who have campaigned for tax justice over time. I’m as much grateful to all of them.

The whole list also features tax journalist Richard Brooks and the If Campaign and Robin Hood Tax Campaigns plus honourable mentions for Jesse Drucker and Tom Bergin who I have worked with in the press award. .

Times have changed. But what will really please me is when what we are campaigning for is delivered and as yet on many fronts we are a long way from that. Until then the campaigning, thinking and blogging goes on.