I was intrigued by the headlines in an FT email this morning which read like this: 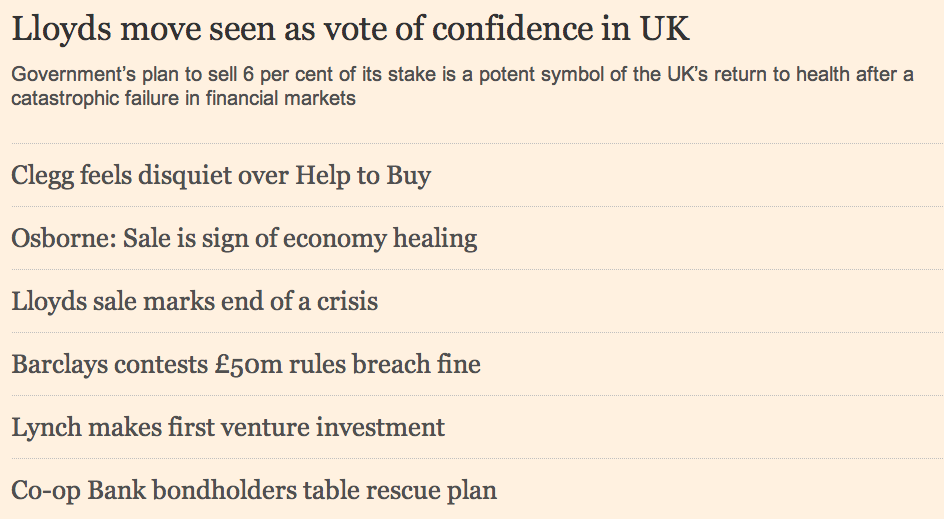 The range of sentiments is fascinating.

Osborne is trying to spin the sale of Lloyds as a success story; the end of a crisis, a return to normality. But that's clearly not true. The LibDems are all too obviously suffering deep divisions over the direction of the government's economic policy, and rightly so, whilst Barclays continue to evidence the disorder in the banking system and the fact that much has yet to be reformed, of which there can be no better evidence than the continuing crisis at the Coop Bank, where the ongoing issues arise directly from the pre 2008 lending environment.

And that's before we consider what is happening in the wider economy.

If in the midst of all this Osborne thinks a small share sale to raise a modest sum represents a major change in well-being he is seriously mistaken. What it actually indicates is the poverty of thinking within Labour when these banks were first nationalised, which should have been bold and which should have used them as the basis for reorganising the whole sector. Second, it clearly indicates that the policy is a return to the old pre-2008 status quo and that nothing has been learned. But most of all it says that rather than make structural reform the blood letting of austerity will continue.

And that's most worrying of all, because that is the last thing this economy can afford.

If only we had a Green New Deal.