The banking sector no longer adding value to the UK Exchequer

There was a reason, perhaps, for putting up with the banking sector when it added to the value of UK tax receipts. But it doesn't any more, as the following chart just issued by HMRC shows: 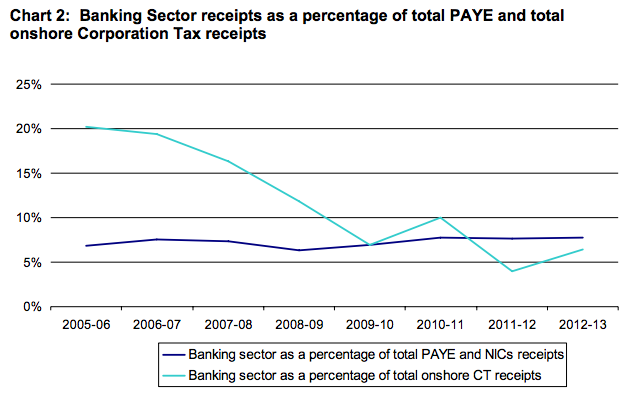 Corporation tax receipts from banking have tumbled and the recovery in 2012-143 is modest and almost certainly related to lower loss provisions.

PAYE meantime has been fairly static in real times, but also a complete red herring in this debate. Banks do not pay PAYE. Their staff do. That's even true of employer's NIC which all economists agree is actually paid by staff through reduced wages.

So to attribute this PAYE to banks is absurd: it assumes that these employees would have nothing else they could do if the banks did not employ them. Of course, if bankers really are socially useless (and some top end ones maybe are) that could be true but most bank employees do actually have highly transferable skills and work in relatively ordinary jobs doing a useless job in the service economy that could easily use their skills elsewhere. So the PAYE they pay is not the banks' liability, it is theirs.

And that means all the banks really pay is corporation tax and the bank levy. And the corporation tax contribution has become pitiful for an industry that has imposed so much harm on the UK economy and which remains, when all is said and done, the only thing the government thinks this country can do.

If ever there was evidence of the need for an economic rethink as to what the UK economy should be about, this is it.