My friend and occasional co-author, Howard Reed has written an article under the above title for the Fabian Society. I recommend a read. As they summarise the article:

Howard Reed finds that the impact of the coalition’s tax and benefit measures could end being as bad for inequality as the Thatcher government’s record. Turning the tide needs to be at the heart of Labour’s strategy for government.

Inequality in the distribution of incomes is the result of a combination of two factors. One is the distribution of gross market incomes, ie income before taxes or transfer payments. The largest component of gross incomes is earnings, but the distribution of incomes from investments and (private) pensions, and property income, are also important. The other main factor determining the distribution of net income is the extent of redistribution by the government through the form of taxes and transfer payments (eg benefits, tax credits). Inequality can rise thanks to increasing dispersion of gross incomes, a reduction in the extent of redistribution, or both. Thanks to household surveys conducted on an annual basis from 1961 to the present day, we now have around half a century of data on the UK income distribution on a reasonably consistent basis. Figure 1 is based on analysis of this data by the Institute for Fiscal Studies (IFS) and shows the evolution of inequality in disposable income since 1961. The measure of disposable income used is net household income before housing costs, adjusted for family size. The figures go up to the 2011-12 tax year which are the most recent figures currently available.

That figure is as follows: 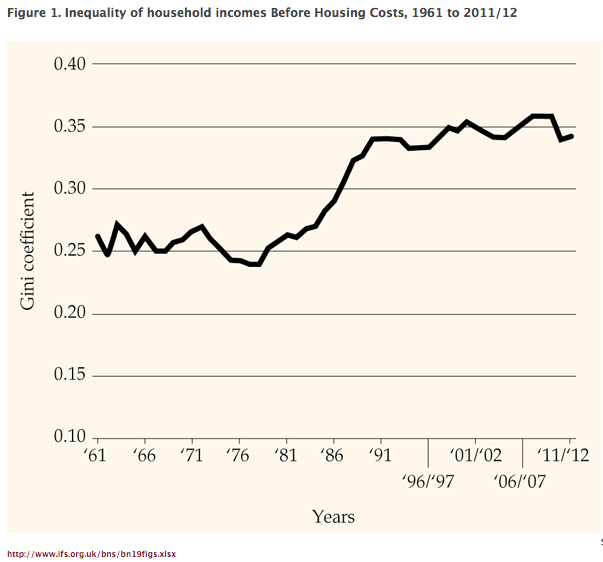 Broadly speaking, the evolution of inequality in Britain over the past 60 years comprises three distinct phases:

But, things are changing:

Figure 2 presents a breakdown of the distributional effects of most of the reforms made to the tax, benefit and tax credit system over the course of the current parliament using a tax-benefit micro-simulation model constructed by Landman Economics for the Institute for Public Policy Research. The analysis divides families in the UK income distribution into ten equally sized deciles ranging from decile 1 (the poorest) to decile 10 (the richest). The line in the graph shows the overall impact of reforms to the tax, benefit and tax credit systems as a percentage of disposable income, averaged across all families in each decile. Overall, the reforms introduced by the coalition are regressive across most of the distribution — the poorest families lose over 12 percent of their net income on average, compared with only around 3 percent of net income for families in the ninth decile. At the very top, the reforms are slightly progressive, with the top decile losing a slightly higher percentage of their income than the ninth decile; this is mainly due to increases in national insurance contributions and below-inflation increases in the higher rate income tax threshold.

The main factor driving the regressiveness of tax and benefit reforms between 2010 and 2015 is cuts to benefits and tax credits, particularly for working age families with children. The generosity of working tax credit, in particular, was cut back severely over this period. Furthermore, the uprating regime for working age benefits and tax credits has been changed from the retail price index (RPI) to the consumer prices index (CPI), and as annual CPI increases are typically smaller than RPI, this means that households reliant on benefits and tax credits lose out increasingly as time goes on. The decision in the 2012 Autumn Statement to limit working age benefit and tax credit increases to 1 per cent in nominal terms — well below CPI inflation — exacerbates the regressiveness of the reforms to social security. Meanwhile, coalition reforms to income tax and national insurance contributions during this time — principally the above-inflation increases in the income tax personal allowance and the lower thresholds for national insurance contributions — help families in the middle of the income distribution more than the poorest families, most of whom were not earning enough to pay income tax or national insurance in the first place.

The result is that we have every reason tho think that as more data becomes available inequality will rise in the UK. As Howard puts it:

That gives anyone concerned about poverty very real reason to worry.

I strongly recommend the rest of the article.