Where there’s muck, there’s brass plates: on the trail of UK ghost companies 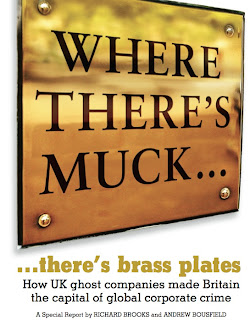 The UK's investigative and satirical magazine Private Eye has produced a major new investigation into corporate crime, handled via the United Kingdom. The subtitle of the piece 'how UK ghost companies made Britain the capital of corporate crime" is quite apt, notwithstanding the best efforts of jurisdictions like New Zealand to outdo the UK.

The article is not online, unfortunately, so if you're in the UK you'll have to go out and buy a copy on the newsstands - it's available now. There's far too much in here to give it full justice, but a couple of paragraphs should give a sense of what's going on here:

“Limited liability partnerships”, of which Vector Aerospace LLP was one, joined the lexi- con of British corporate law only in 2000 as a result of heavy lobbying from Britain’s big accountancy partnerships, which wanted to limit their liability for carrying out dodgy audits without becoming limited companies and so incurring extra taxes. [See Treasure Islands, and the Ratchet chapter, for the extraordinary story of how the accountancy firms got Britain to enact its LLP laws.] The new corporate vehicle allowed them to have it both ways by stipulating that an LLP would have limited liability but would not be a taxable entity itself (see Partnerships in crime).

The new hybrid had great appeal: not just to respectable accountants, but also to those who were up to no good. For if an LLP’s members can also claim that they are not taxable in the UK, there is nothing to trouble the taxman and no inconvenient questions will be asked by the authorities about what the LLP is up to.

This is pure tax haven activity, and Britain is rapidly heading down this road. One last TJN-related section from the story:

"In 2009/10, a study by campaigning accountant [and a TJN Senior Adviser] Richard Murphy found that of the 2.6m companies on the UK companies register, just 69 percent were even asked for a tax return by the authorities and only 45 percent actually submitted one. While it is impossible to measure precisely how many of Britain’s ghost companies are part of interna- tional criminal networks, it is in these helpfully crowded and murky waters that some of the world’s most serious organised crooks swim undetected."

. . . . and much, much more: this is just a taster. You can see the authors, Andrew Bousfeld and Richard Brooks, in a short video clip here. Among other things they watch a postman stuff large quantities of letters through a letterbox, and they're clearly visible through the glass door.

"All these letters have landed face down," Brooks says ruefully: "that's what you call tough sh*t."