What the social security budget is spent on

The myths around what some call welfare and others call benefits but which were and still are best described as social security are manifold; a situation deliberately fostered by government politicians and the right wing press. Some of those myths were addressed in the Observer this weekend. I unapologetically think many are worth repeating here.

So, this is what the social security budget is spent on: 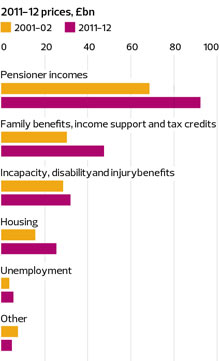 Now, who are the skivers? Pensioners? Working families? Those who would be on the streets without housing benefit? Those wilfully unemployed by a government that refuses to create work? Or who?

Or is it all just a myth to inflict pain on those already poor?