The writing was on the wall for Cyprus: the question is who is next?

In 2007 the IMF published a novel paper by Ahmed Zorome seeking to find a new way to define what he calls offshore financial centres and what I would call a tax haven of secrecy jurisdiction. What he suggested was that the ratio of net financial services exports to GDP might indicate this. He calculated a mean and then the standard deviation from it, with those at one and two standard deviations being highlighted in this table: 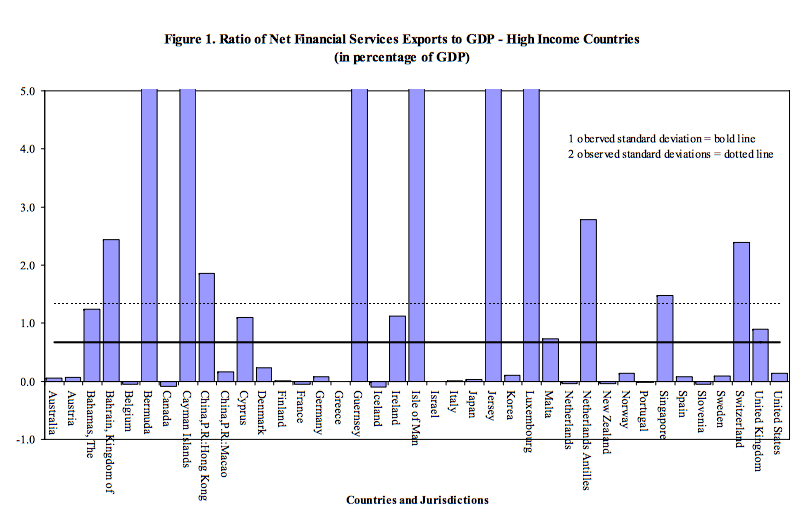 He concluded all with exports of more than a standard deviation from the mean were offshore centres: Cyprus figured in the list. Some places were of course, off the scale.

Some of these places have now failed. Others, like the UK, are having very bad recessions. More, like the UK's jurisdictions, Hong Kong and the Netherlands Antilles (now in constituent parts) survive because of the implicit guarantee of a powerful state. Singapore survives because of the unusual nature of its state. Switzerland is being broken open. Malta looks to be an issue waiting to happen.

What is interesting is the consideration of where the contingent risk lies dormant, and how it might be exposed. Because have no doubt, as many of these places already know, being such a centre is now a recipe for financial woe.

And for those who ask, no I can't wholly explain the Icelandic data, except that the over-extended banks did not export as such; they over extended their direct investment base, which is different from exporting financial services and may be why the bail out pattern it followed cannot be replicated.