Over the weekend the Treasury shut down an abusive tax scheme that was costing £100 million a year in lost UK national insurance. The scheme depended on employers being located in Sark and then claiming employer's national insurance was not due as a result on agency payments to teaches, nurses and others. Tens of thousands of people have been involved in schemes supposedly run from leafy cottages on Sark.

I said on Saturday this was a Guernsey tax scheme. Some in Guernsey erupted in fury. Comments from someone who has said rather a lot, who passes by the name of Patrick, were typical:

Why do you suggest that Guernsey would be responsible for regulating such a Sark scheme? Was it part of a regulated Sark fiduciary’s business? I would advise you to research thoroughly and think hard before you answer that one.

Guernsey simply cannot stop somebody forming companies in the UK and elsewhere, and then contracting directly with Sark residents who are not carrying out any regulated financial services business to provide certain services from there. Guernsey can only intervene if the activity which is being carried out from Sark is one which should be regulated. Running a payroll company is very likely to fall outside of that scope altogether, as its simply a trading business of a non-financial services nature.

I really don’t think that your arrows are being aimed appropriately at Guernsey re. this payroll scheme.

Sark is NOT in Guernsey. It is part of the Bailiwick but it is self-governing. Mail is routed to Sark via the Guernsey Post Office (in the same way that overseas mail to Guernsey arrives via the UK).

I am reliably informed that company number 84559 in Jersey is ISS. It seems to be a Jersey-registered company, with a so-called administration headquarters (yeah right) in Sark, but with everything carried out from the UK.

Absolutely NOTHING to do with Guernsey…..

Well, all that seems heated, so let's now deal with some facts.

First, Sark is in the Bailiwick of Guernsey. Sark does have some separate laws, but saying Sark and Guernsey are not connected is like saying England and Scotland are not connected as they have separate legal systems and yet are members of the UK. So, the claims made are disingenuous.

Second, Guernsey does regulate financial services in Sark. Take this for example, which I found on the web: 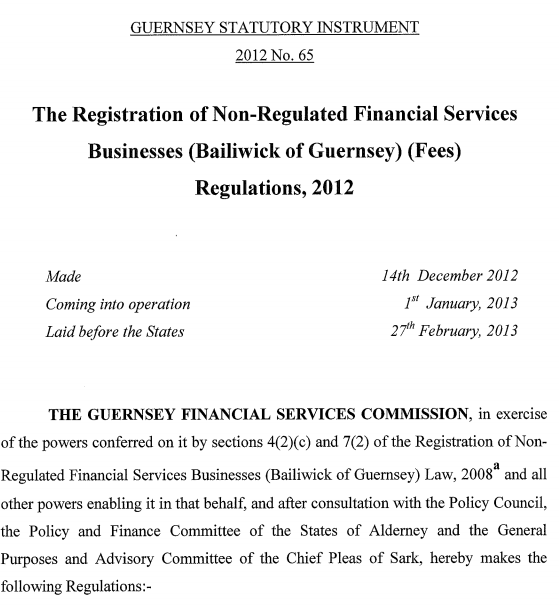 The evidence is clear: non regulated financial services businesses in Sark pay fees to Guernsey for regulation or Sark would not be consulted. So I looked at those regulations. They're here. One of the regulated activities is:

So then I looked at CSS, a Sark payroll company that says rather more on its website than the better known ISS. It says:

Note point 5. Are they managing payments? I would say so. In the UK this would be regulated activity. In Guernsey it's not clear.

I'm not saying CSS or ISS have breached any regulations. I am saying that it looks to me that whilst Guernsey is responsible for Sark it has made sure that those undertaking this tax abuse (as it clearly is in the UK) have fallen out of their regulation. That's an act of omission and not one of commission. But you can be culpable for both and that's precisely what I am saying Guernsey has been. This UK tax abuse happened because Guernsey permitted it by an act of omission. And yes, I am holding it responsible for that.