My closing comments in the Accountancy Age tax avoidance debate, which has been taking place this week, have just been posted. I said:

Where did we get after several days of debate? Let me conclude.

What is clear is that morality drives tax legislation, tax administration and the behaviour of taxpayers. Tax is a moral issue and always will be so because the law cannot be, and never will be, certain.

In that case personal morality and politics indicate where almost everyone is in this debate. Those who subscribe to neo-liberal thinking that suggests that the right of the individual comes before all else support tax avoidance, not least because this philosophy is built on a disdain for government.

Those, like me, who think we live in a society and have obligations to each other and express that by a belief in the right of democratic governments to govern, think tax avoidance an attack on society, our neighbours and democracy itself.

Thankfully we still live in a broadly compassionate democratic society. And that's exactly why tax avoidance is now being condemned right across the mainstream political spectrum, and will be so long as ordinary people who are its victims continue to have a say in this country.

Where you are then comes down to a pretty basic question: do you care about morality, others, society and democracy, or not? If you do you're likely to agree with me and almost all UK democratic politicians. If you don't then I suspect tax avoidance is for you.

Unsurprisingly, Stephen Herring of BDO does not agree. Worse, he seems intent on playing the man rather than the issue. That's disappointing.

The voting so far is incredibly tight: 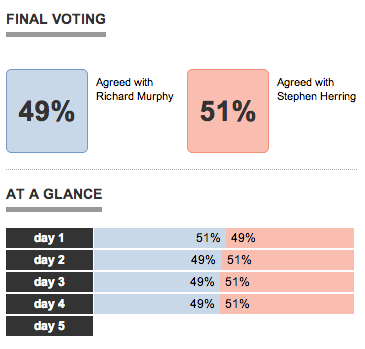 You can still vote, here. Itv would be a shame if the neoliberal world view won.