As Suzanne Moore rightly notes in the Guardian this morning, this has been the year of the foodbank.

Next year it will be worse.

As Howard Reed and Jacob Mohun Himmelweit recently argued for the TUC, this is not surprising. The share of overall national income going to labour is falling, as these graphs show: 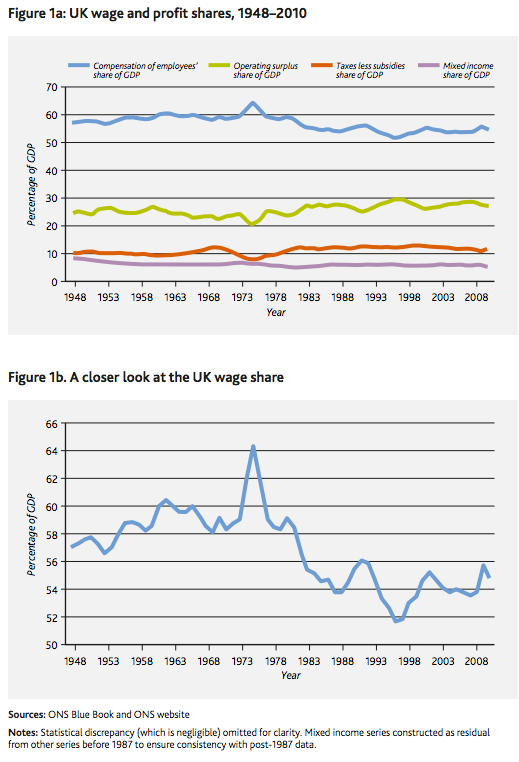 For those on the right who argue that the data does not in fact show a falling labour share I offer this chart for the USA, admittedly but for which I can't find a UK equivalent right now, although the trend is similar. It comes from Zero Hedge, yesterday:

The reason why labour shares may not have fallen as much as expected is most of the share is now being eaten up by a few at the top: the rest are now very much worse off, barring in the US those on very lowest incomes. The shift in income distribution is hidden in GDP data.

We have a more unequal society. More people have less income. Poverty is increasing. People are desperate, and yet our government spins a narrative that says that those unable to work or those unable to find work that lets them live anything approaching a decent life because of the miserly wages paid to them are to blame.

Those people are not to blame. They are the victims of a cruel and heartless school of economic thinking that is deliberately pushing the poorest to the margins of society, and to the margins of their grip on anything like the life all should reasonably enjoy in this country.

It's why I've blogged this year.

It's why I still will be blogging next year.

But always I do so because I know this need not be the case. With proper tax systems, with proper accountability, with attention focused on the real cheats in society - far too many of whom are hiding the wealth of the already rich and major corporations from taxation which if paid could help solve this problem - we could alleviate this poverty.

I'd like to thank the Joseph Rowntree Charitable Trust for helping me work on this issue this year. And next year too. I am aware they are criticised for helping me and the Tax Justice Network do so. But surely if poverty is your concern isn't this one of the biggest issues on your agenda? They think so, and I'm incredibly grateful for that.