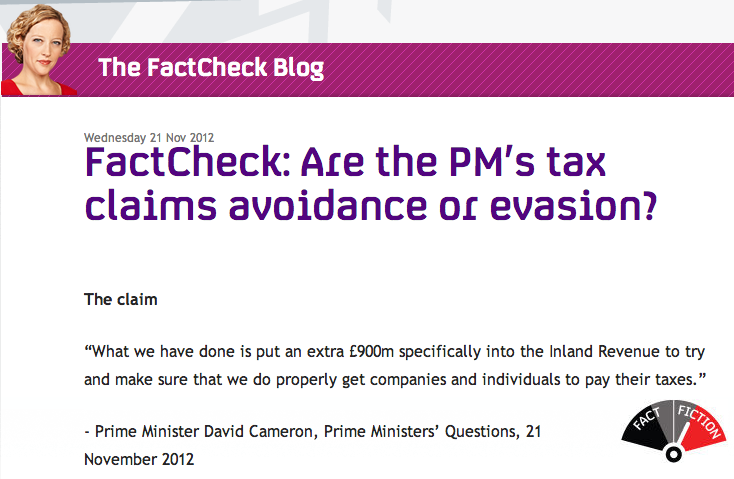 The analysis is based on Cameron's claim that the government were reinvesting £900 million in HMRC to target tax avoidance.

Of those savings, “ministers have agreed to reinvest £900m over the four years to combat tax avoidance, evasion and fraud”.

In other words, they’re being asked to implement budget cuts, and of those cuts, some of the money would be given back.

It still meant that even after the £900m was “reinvested”, the net effect was a reduction in the budget of 15 per cent.

And as they conclude:

It’s disingenuous of Mr Cameron to attempt to claim the government has “put in £900m extra”, when in practical terms, it’s just taken a bit less away.

When we asked the HMRC to explain the give and take in their budgets, they admitted that it was actually “recycled” money.

“Over the course of the Spending Review, HMRC will make savings to reduce spending by 25 per cent in real terms. £900m of those savings will then be recycled into additional work against avoidance, evasion and criminal attack,” the department said.

And when we look at the programme that money has been “reinvested” into, Enforcement and Compliance, it’s worth noting that it’s been hampered by staff cuts (we’ve FactChecked staff cuts before).

Not outright truth evasion, but probably more like truth avoidance on this one.

Which makes it a work of fiction, as they note in their headline.

All of which should depress us, given the fact that this choice to cut HMRC comes at a time when we are running the biggest deficit in our history, which for its own reasons this government seems determined not to collect.