Why austerity will never work, but putting people first will

I'm speaking at a PCS fringe meeting at the TUC conference in an hour's time. My theme is that austerity will not work.

My core theme is that austerity is the wrong reaction to the crisis we're in. I explained, in part, why this was the case yesterday.

This graph, again from a TUC source but using data from the Office for National Statistics is another explanation: 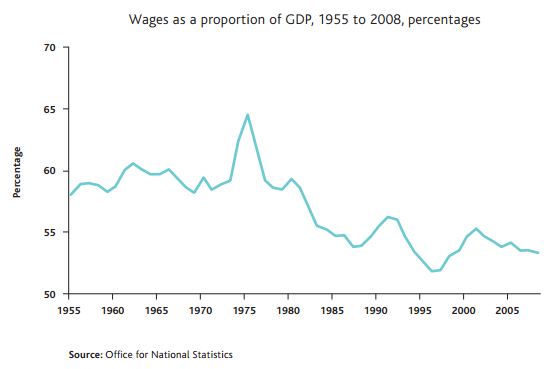 That's a massive shift away from the reward to work in the economy.

That means people are paid less for the value they create.

But it also means that value is taxed less as profit is now (unlike the 60s and 70s) much less taxed than labour.

And this is despite a real rise in the population.

The result is there is more demand for public services and less to pay for it. So we have a government funding crisis.

And we have people who are forced to borrow to make ends meet.

Austerity won't solve this. Only a real increase in the reward to labour will do that. Our economy is out of balance. Unless that is put right we're in trouble.

And we can put it right. We can invest in business, housing, infrastructure and the services we need. I explain how, here.

All this is possible and affordable. But it will take politicians and economists who believe that people matter; that paying people fair wages matters and that finance has to be the servant of people and not its master.