Why have corporation tax receipts fallen by 20%? Start by blaming George Osborne – as it’s all his fault

It is claimed a one off repayment of £0.7 billion affected this sum in the Treasury report on the issue: the payment was to a Bank of England subsidiary. That seems an unlikely explanation for such a big variation in the data. In any event, I'm sure it's not being taken out of account when it was paid, which appears to have been January.

So the question arises, why has the fall been so big?

There are a number of good reasons. First there are falling rates. This is the HMRC data on rates: 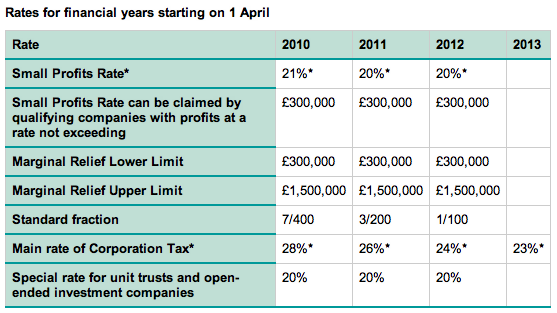 Large companies are now paying on account for 2012. A 7.7% decline could simply be attributable to the tax rate if all were at the large company rate. Not all of it is at that rate, but even so,  this loss can simply in part be due to a deliberate government give away at a time when it could not be afforded.

Compared to two years ago the rate could explain a decline of revenues of coming on for up to 16%.

Second, and I admit this is speculative, some companies may now be anticipating the impact of new controlled foreign company rules in their payments on account. The Treasury said in Budget 2011 that these would cost £210 million in lost revenue this year and I have always thought this a massive underestimate. This encouragement for companies to abuse tax havens to hide their proofits may already be costing us dear.

And then thirdly of course there is the fact that HMRC simply does not collect tax from many small companies, even when they owe it. As my research has shown, in 2009/10 just one in three companies managed to submit a tax return and over a third of all tax returns HMRC requested were never delivered. Tax evasion is rife in this sector, and the declining staff numbers at HMRC are bound the making this worse.

So, why are the numbers getting worse? There is one simply explanation: policy decisions are making them worse for all these reasons.

And they're going to get much worse still next year as more tax cuts and the full controlled foreign company rules come into force. And what's the impact of that going to be? No doubt more cuts in benefits, more sports fields sold and more people made unemployed. All so that large companies can get richer.

That's the bankruptcy of this governments economic policy for you.