One graph that reveals the failure of Osbornomics

The IMF staff report on the UK is revealing in many ways. It's diagnosis is easy to summarise: they say Osborne has failed. But if you want to summarise that one graph will do. It's this one: 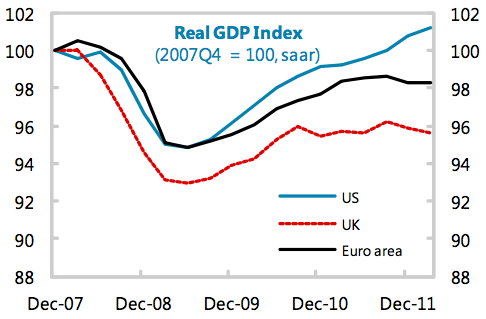 The US has recovered its 2007 position now.

Despite all its woes the Eurozone is trying.

And the UK? Revering well until mid 201 and from then on stuck, before heading back into crisis.

What's the one thing that explain the UK after mid 2010? Osborne. The one word explanation for why we're in deep, deep trouble compared to all others.

I guess I have the comfort of saying "told you so". The IMF haven't.