Isn’t it odd that the first thing Tory front @UKRightAngle campaigns for favours the rich?

The Tories are getting scared by the success of the left in using the internet for campaigning. Avaaz and 38 degrees seem pretty neutral to me; Labour Left is not. All have been highly successful in using the net to campaign, and I applaud them for it.

Now the Tories are launching Right Angle. It bis horribly jingoistic, but perhaps most tellingly its first campaign is typically Tory. They're campaigning to increase the tax personal allowance - the amount each person can earn each year tax free - to £10,000. Their claim is:

This tax-cut would make most people £700 better off, every year.

The only trouble is, that as the Institute for Fiscal Studies have shown, that's just not true. As the Guardian reported on Friday:

Today, the Institute for Fiscal Studies publishes research that reveals who really benefits most [from this policy are] some of the richest households in the country.

As George Osborne weighs up the competing arguments of Tory backbenchers before the budget on 21 March, his Lib Dem coalition partners and furious middle-class mums about to lose their child benefit, James Browne of the IFS lays bare the reality of focusing the Treasury's firepower on raising the tax threshold.

One third of all adults receive no benefit from the change at all, because they already earn too little to pay any income tax. Looking across families as a whole, instead of taking taxpayers as isolated individuals, it becomes clear that because both people in a two-earner household each get to claim their own personal allowance, they would do best out of the measure. Even as a percentage of their income, it is higher earners who benefit most.

And any attempt to lower the threshold for higher rate tax to get round this will mean 200,000 more families will lose child benefits.

The graph says it all: 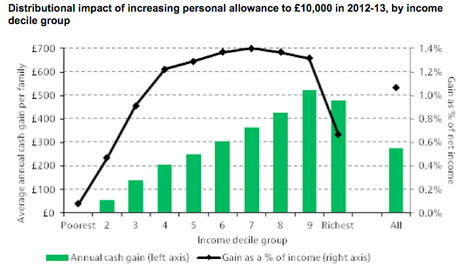