HMRC and the tax gap: their data just does not stack at all (wonkish, but worth reading)

I thought it would be useful to highlight the incredibly small sample base of HMRC's tax gap data for direct taxes, published this weak.

As I have explained at length here, HMRC have got a reasonable methodology for estimating the tax gap for VAT and other direct taxes and one that is hopelessly inadequate for calculating the tax gap on direct taxes like income tax, national insurance, corporation tax and capital gains tax.

As they note in their report these direct tax gaps are based on:

The main methods used to estimate tax gaps for direct taxes are random enquiries, risk registers and data matching. These are discussed in more detail below. In addition, where robust methodologies have not yet been developed, an illustrative estimate of the tax gap is given based on expert opinion or derived by selecting the nearest equivalent measured gap.

Random enquiry programmes involve samples of taxpayers being selected at random and their returns being subjected to full enquiries by HMRC officers. HMRC has random enquiry programmes for individuals subject to Self Assessment, small and medium-sized businesses subject to Corporation Tax Self Assessment and small and medium-sized employers. The sizes of the samples for the three programmes are shown in Table 7.1 below.

So, the results of findings and errors noted in these random enquiries are extrapolated to calculate the tax gap. This is the table in question indicating the number of random enquiries used as the basis for this work:

Some of the data in this table does itself give rise to enormous questions of credibility.

For example, can anyone, for a moment, believe that HMRC  really did exactly 1,649 PAYE  audits  without ever varying by just one more or one less in each and every year  from 2000 to 2008?  I candidly simply do not believe them.  That is not plausible  and to publish date of the tax cut on the basis of such utterly implausible data undermines the credibility of any resulting estimate, completely and entirely.

Second, note that the extrapolation is based on self assessment tax returns received. I have researched this issue with regard to limited companies for a report I published here. Let me show some data from that report, all based on parliamentary answers. First of all this:

In 2009 over 30% of companies in existence weren't asked for a tax return by HMRC, a rapidly increasing trend. Only 18.5% of companies certified themselves dormant. But note: we don't know the dormants and the companies not asked are the same, and nor do HMRC. Nor do we know they're actually dormant and HMRC definitely does not. They have no way of knowing - the data is not available to them (I've checked, I've asked). All we do know is HMRC turned a blind eye. None of those companies submit a tax return. So they can't be included in the tax gap data because that's based solely on those who do submit returns. But what the heck? Why worry about organised crime that abuses this it evade tax, or estimating how much it's worth?

Second look at this:

Of the companies asked for returns vast numbers don't submit then - in 2010 over a third ignored the request to submit the return altogether. But they're not in the tax gap data either because HMRC investigate returns they get to form their view - not the ones they don't get. But less than half of all companies submit returns.

So now look at this logic which I have extrapolated from the data available here and in the report: 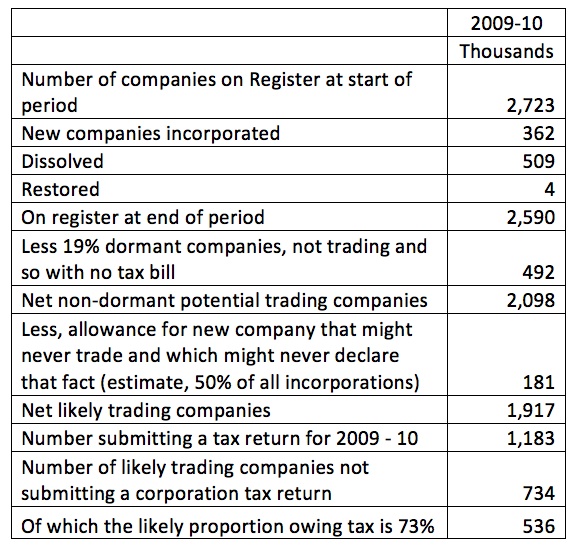 In 2009-10 there were likely to have been a net 1.9 million trading companies in the UK. I stress: I have allowed for near enough half a million dormant companies and companies that are formed and might never trade in coming to this number, or nearly 700,000 dormants in all.  734,000 of these did not submit a tax return. More than half a million probably owed tax.

How many companies did HMRC investigate in the year - who submitted tax returns? Based on the above data, maybe 400.

And you wonder why we have a tax gap?

And you wonder why I say their data is wrong?

And that's not the only absurd ratio to be picked out from this data. There are near enough 30 million tax payers in the UK and they randomly enquire of 3,200 a year - a number halved when staff cuts began, please note. The result is a person in the UK is likely to get a random tax enquiry once every 9,375 years, or thereabouts. That's a massive deterrent, isn't it? And also a far from adequate base for extrapolation of data of this sort.

Let's put this another way: these estimates show:

a) How inadequate is the work of HMRC due to the shortage of resources;

b) How inadequate the management of HMRC is for agreeing to those resources;

c) How inadequate is the HMRC estimate of the tax gap;

d) How appalling is regulation of small companies in this country;

e) How likely it is that the tax gap is vastly bigger than HMRC say (as I suggest, often).

But still ministers will argue otherwise. What are they trying to hide?  Could it be they really don't want to collect tax from the crooks and the cheats? Is that their reason for denying the truth? Anything else is very hard to imagine.