When it comes to tax policy, is Ireland a fine example or ahorrible warning?

This new report by Dr Sheila Killian of the University of Limerick argues that Ireland's corporate tax regime can be abused by multinational companies (MNCs) engaged in tax evasion and illicit capital flows. Despite recent reforms to transfer pricing rules, significant weaknesses remain that provide MNCs with opportunities to create abusive international tax avoidance schemes to reduce tax payments in other countries. The result, according to Killian, is a policy incoherence which, among other things, goes against Irish commitments to ensure that government actions contribute to global development and do not undermine the objectives of Irish Aid.

This policy incoherence cuts to the heart of current thinking on development. As the report illustrates in the following flow chart, external debt burdens are closely linked to weak tax effort (the ratio of tax receipts to GDP) and increased dependence on external loans and aid programmes. The latter typically impose conditions which further undermine tax justice and ultimately contribute to fiscal and economic crisis. Tax competition lies at the very heart of this cycle. 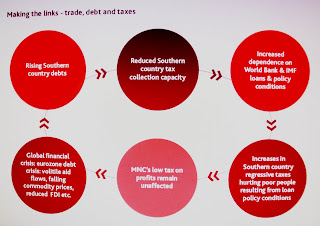 Ireland has famously - and controversially - used its low corporate tax rate as a bait to attract foreign direct investment, and despite its current fiscal and economic crisis, strongly resists external pressures to remove some of the loopholes that allow the tax system to become a vehicle for complex tax cheating schemes. As we have blogged elsewhere, companies like Google are attracted to Dublin not so much by the 12.5 percent tax rate as the ability to use Ireland as a part of a more elaborate tax structure - in Google's case employing the Double Irish (and Dutch Sandwich) techniques involving the routing of profits through Ireland and the Netherlands.

Despite being a relatively small player in both the European and global contexts, Ireland is able to exert a quite extraordinary influence on international tax policy. This influence derives from very active participation at a number of international fora, including the OECD, the UN Tax Committee and, of course, the European Union. This puts Ireland in a position of choosing between being a force for good in promoting enhanced international cooperation on tax matters, or a force for bad in blocking progress in that direction. In TJN's experience, for example of observing at sessions of the UN Tax Committee, Irish representatives have in the past more generally aligned with blockers such as Switzerland, Liechtenstein and the United Kingdom.

The big question facing the incoming Irish government is whether - and how - to modify their corporate tax regime in ways consistent with the commitment to "work for a coherent approach to development across all Government Departments." (Government of Ireland White Paper on Irish Aid, 2006). And can this be achieved without adversely affecting the country's ability to attract inwards investment? Killian proposes 11 recommendations which, she argues, would strengthen policy coherence while also providing potential net future gains for the Irish economy. These measures include:

- Adjustment to the transfer pricing regime;

- Negotiation of tax treaties with a wider range of countries;

- Promoting enhanced tax information exchange, preferably on an automatic rather than on request model;

- Promoting a country by country financial reporting standard for MNCs.

Driving the Getaway Car is a timely and useful contribution to an urgently needed debate. The new Irish government faces tough choices on tax policies. The current situation is unsustainable and a new development strategy is urgently required. They can either opt for further tax competition, which we would argue is harmful to the interests of other countries and ultimately self-defeating (see Sheila Killian's article in Tax Justice Focus here), or they can strike out in a direction that reduces harmful impacts on other countries and contributes to strengthening internal fiscal sustainability.

As Killian argues in this report, the current tax policy mix is not coherent with existing commitments to avoid causing harm to other countries. Change is necessary, but does the current government have the appetite to take on the vested corporate interests who find the current corporate tax regime, with all its gaps and loopholes, very much to their liking?

NB: Above reposted from Tax Justice Network blog with permission