Answering the man from the BBA

My blog, posted whilst I was away, about a man from the British Bankers’ Association politely defacing a Robin Hood Tax poster in one of my friend’s holiday establishment has resulted in some comment, not least that I respond to the points he raises. So I will.

The comments were as follows: 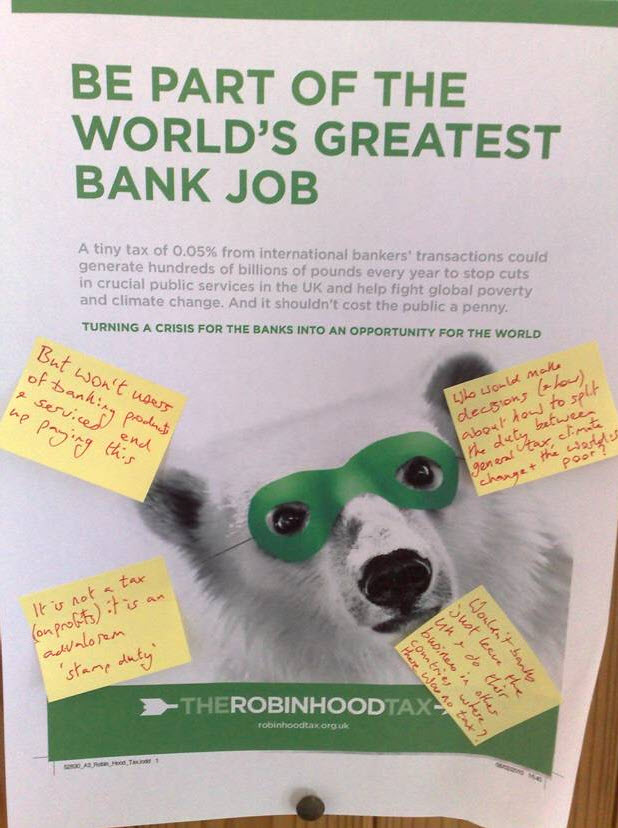 The answers are (working anti-clockwise from top left):

1. Yes – users will end up paying, but as I argue in Taxing Banks (page 3) the impact will be tiny because:

a significant part of the incidence of any financial transaction tax will fall on those persons working for banks and other financial institutions working on the trades and investments subject to the new charges, and ‚Ä¶ this is where any part of the incidence, apart from that falling on bank profitability, is considered likely to arise. This is because the anticipated fall in volumes traded inherent in the calculation of potential revenues due will inevitably result in a fall in the number employed in these activities. This is unavoidable and likely to be consistent with the falls in volumes traded. In addition, those engaged in these particular activities are those most subject to criticism for the excess rewards paid to some bankers. The capacity for the recovery of the financial transaction tax charges arising from out of current remuneration considered excessive by policy makers and governments worldwide is sufficient to ensure that the combination of falls in the numbers employed and the pay of the remaining engaged in activities some have described as ‚Äòsocially useless’ will mean that the incidence of these financial transaction taxes will fall almost entirely on a relatively small group of bank employees in a fashion consistent with government economic, social and regulatory policy. This is the perverse paradox of the incidence of financial transaction taxes: the incidence is wholly policy reinforcing and consistent with government policy, popular sentiment and economic logic.

No wonder the man from the BBA is worried.

2. True. It is meant to be a stamp duty, but one which is paid by banks so impacting their profit.

3. No, not at all. The tax can be enforced wherever the bank is located because it is on currencies – and they all eventually pass through central banks. and, as the man from the BBA also well knows – there is no profit to be made elsewhere – trading requires clusters of activity – and that means London, New York, (maybe) Frankfurt and Tokyo. The rest are ‚Äòalso rans’. Time zones mean these are and will always be the only real places to trade. there is nowhere else to go.

4. Governments. It is called the democratic process, governed by the ballot box. Odd that you might need to be reminded hat this is how such decisions are made.

In other words – the objections are just holiday bluster. He’d have been better off out in the sun, on the beach, or having another cream tea.