The sheer arrogance of some people and companies is staggering. I presume they think that because they're big and command considerable resources the rest of us will believe what they say.

Take this comment from group head of tax at Vodafone, Joel Walters:

There is a danger, I think, that multi-national corporations in particular are perceived as avoiding tax in respect of how they structure their operations, and the first thing I'd say is that tax avoidance, defined as not paying the amount of tax the law requires, is actually very rare.

I would hope it is. Not paying the amount of tax the law requires is tax evasion. That's criminal, and I would sincerely hope that behaviour is uncommon amongst multinationals.

Tax avoidance is not paying the amount of tax the law expects. That's something quite different.

I suggest Vodafone don't pay the amount of tax the law expects. The following data is extracted from their annual reports, and adjusted according to the Tax Gap methodology; 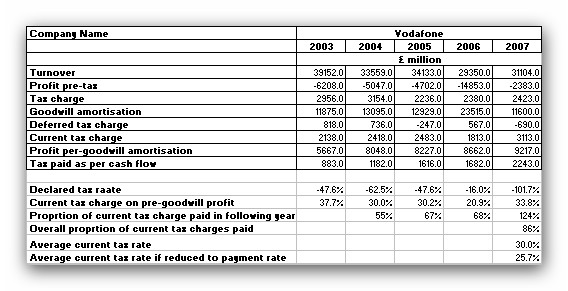 You'll note that if adjustment was not made the tax rates are meaningless.

After adjustment Vodafone appears to have an average current tax rate (averaging over the five years as a whole) of 30%. Spot on the UK tax rate.

But then note that Vodafone actually doesn't pay its declared current taxes. It only pays 86% of them. I adjusted for opening and closing tax creditors by the way. That leaves an effective actual tax rate of 25.7%. That's not paying the rate of tax the law expects.

Why? I'll suggest the remaining 14% is provisions to cover avoidance on issues yet to be resolved. Like this and this.

Now lets go back to Walters comment. Tax avoidance he says is rare. Is 14% of tax liabilities avoided an indication of something that's rare? I don't think so. I call it about £1.7 billion in Vodafone's case. How come Mr Walter can't spot that?