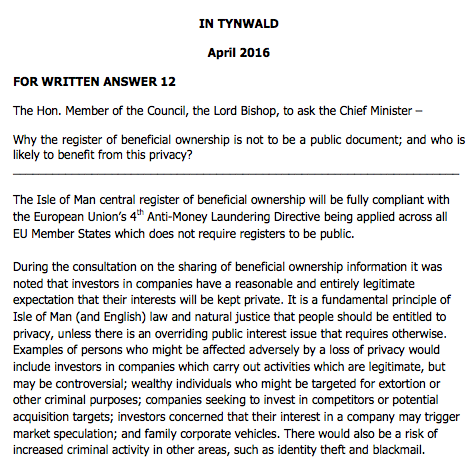 The Bishop clearly understands both accountability and responsibility, and the relationship between the two. That fact is implicit in his question. The response indicates an appreciation of none of those things.

First, of course there is a right of privacy. I have said so of late in debates on whether tax returns should be publicly available: as yet this is something the UK is not ready for even though there are obvious advantages that might arise from their publication. But this is an issue that concerns what I called 'warm bodied people'. They're easy to identify: they're the walking, talking variety of people who need to be defined for this purpose because we also have legal people. The latter are, of course, companies. These have a separate legal existence from their members for whom they are neither agents or representatives and are as a result utterly legally distinct.

No one need be a member of a legal person (or company). Less still does a person have to form such an entity. But if they do then not for one moment are they and the company legally synonymous. It is precisely because they are different that many will wish for a stake in such an organisation: the difference means that in the event of the company needing to default on its obligation to pay its debts the owner of shares within it will not be liable to pay.

Distinct they might legally be then, but devoid of a relationship they are not. As the Bishop understood, such a mechanism can quite clearly be used to hide the true identity of the persons directing but not owning a trade, and we are well aware that this has been massively abused for tax purposes.

That is why privacy cannot be afforded to companies. Privacy, when granted to companies, is not the same as when given to an individual. You may deal with me in person without knowing of my finances (although credit checks are possible, and of course) knowing that come what may to the limit of my assets, and to some extent of my earnings, I am responsible for paying you. In that case personal privacy does not remove my responsibility.

But in the case of a company it does do just that unless we take steps to prevent this happening. In exchange for share capital of a pound or two a company that is granted privacy (through the right to use nominees directors and shareholders, for example) actually acquires something very different, which is anonymity. That anonymity permits the negation of responsibility. This is my key point. And this denial of responsibility cannot, as the Isle of Man seeks to suggest possible, be equated with personal privacy. In the case of personal privacy responsibility remains implicit: in the case of companies it does not. For that reason they are fundamentally different. This is why corporate responsibility created though the disclosure of ownership (shareholdings), control (directorships) and capacity to pay despite limited liability (accounts) is essential on public record.

The Isle of Man gets this as profoundly wrong as the accountant who debated the issue with me on Radio 4 did last week. The excuses they offer for privacy in companies ignore this fundamental point and they then just make things worse.

So, when they say those who undertake controversial acts deserve and anonymity they effectively endorse irresponsibility.

And when they suggest that those with wealth must be protected they firstly deny that wealth carries with it responsibility. Second they ignore the fact that identifying people with wealth is really not hard without access to accounts: such people usually live in the biggest houses, drive the largest cars and habitually display their status. No one need to check their accounts to find out they have money and there is not the slightest evidence that anyone has ever presented that this has been the only source of evidence in an extortion case. To put it another way, this suggestion is just untrue.

After which the claim that anonymity might be used to disguise a person's activities in markets is at least honest, except that what it actually very obviously does is endorse cheating. It also endorses the the denial of information that economic theory makes clear is the only basis on which efficient markets can exist - which is the availability of open and transparent information. This argument does then not only embrace a quite specific and pernicious form of corruption, it also evidences no faith in free markets.

After which the claim resorts to suggestions of blackmail, which is a duplication of the previous claim on extortion (at which point one begins to suspect that the author of this response is getting a little desperate) whilst a reference to identity theft is dropped in for good measure. And yet corporate anonymity is itself the ultimate form of identity theft: by denying identity it ensures those with whom a company may trade any chance of knowing what it really is and what its capacity to trade might be.

These then are lame excuses of which the Isle of Man should be ashamed. They endorse cheating, they deny truths and they are intellectually flawed. And yet they are the foundation of the Isle of Man's continuing role as a tax haven or secrecy jurisdiction.

The Bishop comes out of this well.

The government in Douglas does not. It should hang its head in shame for using such arguments to justify the abuse that it still permits.