The government’s plans are profoundly regressive: an explanation in charts

Howard Reed has produced a new report for the TUC that combines government departmental spending plans announced in the November 2015 Spending Review with a range of UK household-level datasets on the use of public services by individuals and families to measure the distributional impact of the announced changes on services delivered to households. The findings reinforce the work that Ronen Palan and I did in October last year by showing that real funding per capita is falling across all public services — even in the ‘protected’ areas such as policing and health.

If figures are looked at initially as cash equivalents then this is the distributional impact: 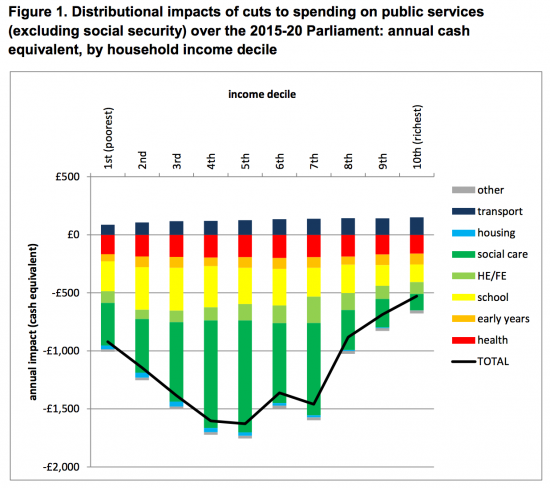 But when stated, more relevantly, as a proportion of total household living standards (defined as household disposable income after taxes and social security payments, plus the value of in-kind public services) the picture changes somewhat: 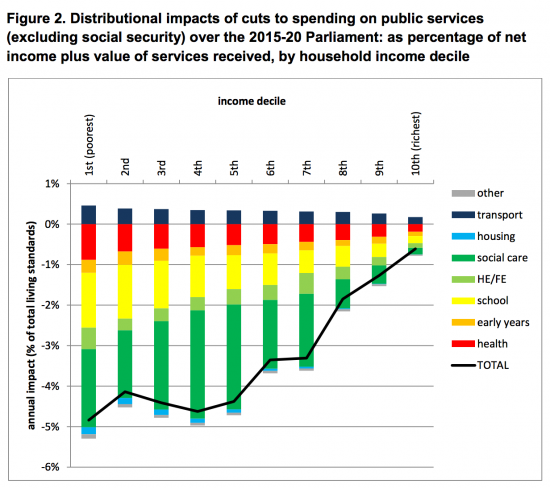 It is now clear that as a proportion of total living standards, the spending cuts are regressive; the lowest income decile experiences an average reduction in living standards of around 5 percent, while the 2nd, 3rd 4th and 5th deciles experience reductions of around 4.5 percent. Meanwhile, average losses for the top decile are less than 1 percent of living standards, and for the 9th decile only just over 1 percent of living standards. Spending cuts have a very regressive impact by income decile for all of the spending categories. And as this graph shows, this means that the lowest-income families will suffer a drop of more than 5% in their living standards between 2015 and 2020. And most low- and middle-income families will see a fall of around 4.5%. By contrast, those with the highest incomes will see a fall of less than 1%.

Cuts to social care and schools account for the bulk of the fall, with middle-income and poorer families far more reliant on these services than wealthier households.

Cuts in social care and health mean that the impact is greatest for single pensioners, though lone parents and couples with children also face big falls in living standards due to cuts to early years and school-level education: 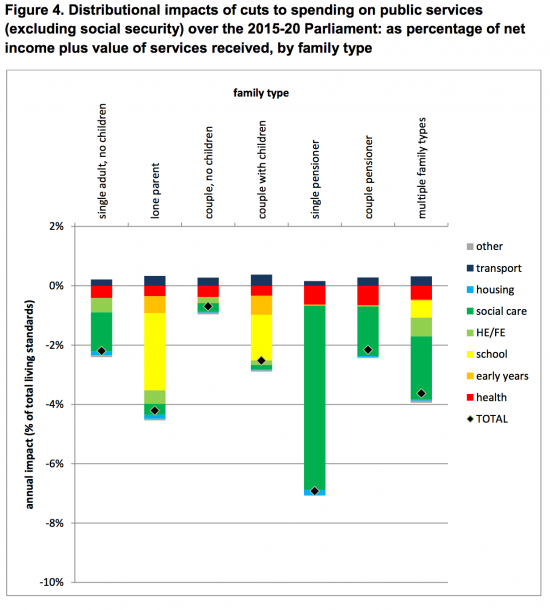 This is misery foretold, but not for everyone, as this final table shows: 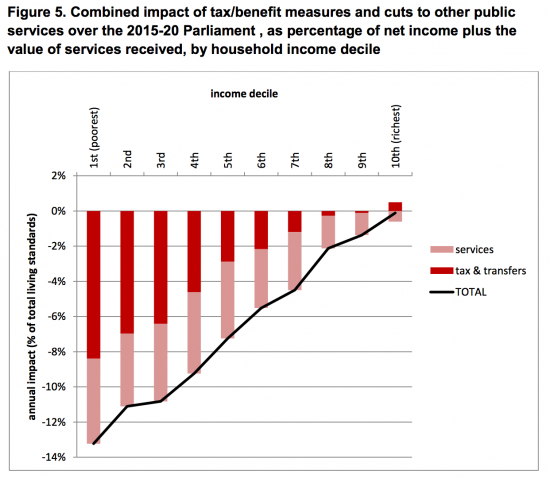 The government's proposals are profoundly regressive. My work is concerned with the way in which the tax system (and as consequence the social security system) can be used to relieve poverty. What this graph shows is that the exact opposite is going to happen over the next five years: regressive changes that will increase inequality in the UK will occur.

I cannot stress the significance of this enough: our society is already divided and it is set to get worse.

This, and not party politics, is why I criticise the government. It is impossible to have concern for the well being of this country and not be profoundly concerned at such a proposed outcome, in my opinion. Which is why I think this a profoundly important piece of work.