A new report by me analysing the result of EU bank's country-by-country reporting under the terms of the Capital Requirements Directive has been published by the EU's Green MEPs, for whom I undertook the analysis. The report is available here. The summary says:

This report is based on the country-by-country reporting of 26 European Union based banks, 17 of which had published the full data now required of banks by the time the report was prepared and nine of whom had still only published the partial data permitted in 2014.

The country-by-country reporting from these banks was used to test the hypothesis that some or all of these banks may have been systematically over-reporting their profits in low tax jurisdictions or places identifiable as tax havens whilst under-reporting them in those places where they are either based or have major centres of operation.

The report suggests that this hypothesis has been found to be true: overstatement of profits in identifiable low tax and offshore jurisdictions appears to be occurring based on the data published by the banks surveyed.

The report addresses the issue of profit relocation in two ways. Firstly, using the principles of unitary tax reporting, which would apportion profits to states where they could be taxed at local rates (a system akin to the European Union’s Common Consolidated Corporate Tax Base) based on evidence of real economic activity taking place in that jurisdiction as represented by turnover and people employed it was estimated for the seventeen banks that reported full data, using their data in aggregate total, that it was likely that there was systemic reallocation of profits, or base erosion and profits shifting as the Organisation for Economic Cooperation and Development describe it.

This result was very clear: as section 11 of this report makes clear a review of 131 jurisdictions shows potential reallocation of profits exceeding â‚¬100 million into or out of the following jurisdictions: 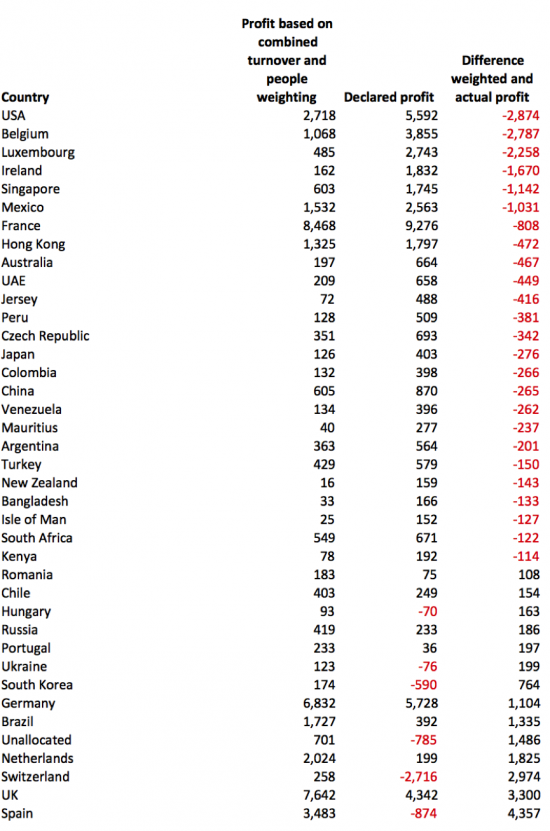 Data in red in the right hand column indicates over-reporting in the jurisdiction whilst data in black indicates under-reporting.

There can be no doubt that some of the reported differences are due to underlying economic circumstances. The Swiss data is, for example, distorted by a â‚¬2.9 billion loss reported by BNP Paribas in that country. UK data is also likely to be distorted by head office functions recording losses as a result of fines for financial misdemeanours charged on many UK banks. The Spanish economy has also, undoubtedly, had a difficult time.

The lesson from the Netherlands and maybe the UK and Germany is, however, that it does not appear to pay, at least in terms of reported profit and so likely potential tax yield, to host bank headquarters. This does not, however, appear to be true of France, which appears to enjoy over-reporting of profit. It is also not true of the USA, which appears to have exceptionally high profit reporting: why is not readily apparent although some banks e.g. BNP Paribas suggest that income from the Cayman Islands is reported by them in the USA.

It is notable (but not shown here) that there is exceptionally low reporting of income and profits in many of the expected tax havens such as Bermuda, Cayman and the British Virgin Islands. This is also true of Guernsey, although it seems likely that many banks include data for this island in their reporting for Jersey.

What is, perhaps, unsurprising is that there appears to be above expected reporting in many jurisdictions where this might have been anticipated including Belgium, Luxembourg, Ireland, Singapore, Hong Kong, UAE, Jersey, Mauritius and the Isle of Man, all of which have a reputation for acting as offshore tax locations for various reasons. Prima facie evidence of the relocation of profits to locations where that might be expected to provide a tax benefit does, therefore, appear to exist based on this data.

Secondly, assessment of the reporting of individual banks was undertaken. Because analysis of country-by-country reporting data is a new field of accounting research four possible methods of assessing potential profit shifting within individual banks were used in this survey with the results then being combined to provide an overall ranking. These methods were:

Each of these rankings was then combined to produce an overall ranking for the surveyed banks, with a rating of 1 indicating the highest risk of base erosion and profits shifting taking place, although, it is stressed, not proving that it does: 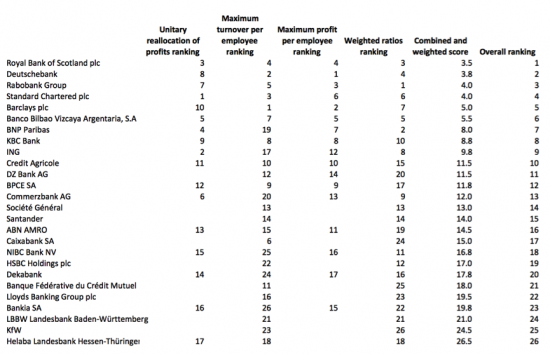 Broadly speaking the four measures moved in line with each other with none at this stage, and with this limited amount of data, proving to be conclusively the most useful. Equally, it is clear that reliance on one alone may be insufficient: Royal Bank of Scotland may come top overall but does not in any individual ranking.

Broadly speaking larger banks appear more likely to be profit shifting. As the detailed findings for each method show, the disparity in behaviour is very wide, some banks appearing to have considerably more risk inherent in them than others.

Some European Union jurisdictions emerged as very clear potential destinations for the relocation of profits in these surveys in ways not apparent from the country data. In particular Ireland seemed a particularly likely destination whilst Malta also stood out. Some other destinations, such as Finland, were harder to explain.

What is clear, based on this survey, is that: