The UK: open to business from tax abusers keen to take Osborne’s bribes

I liked this cartoon in the Guardian yesterday (deliberately small, click here for original): 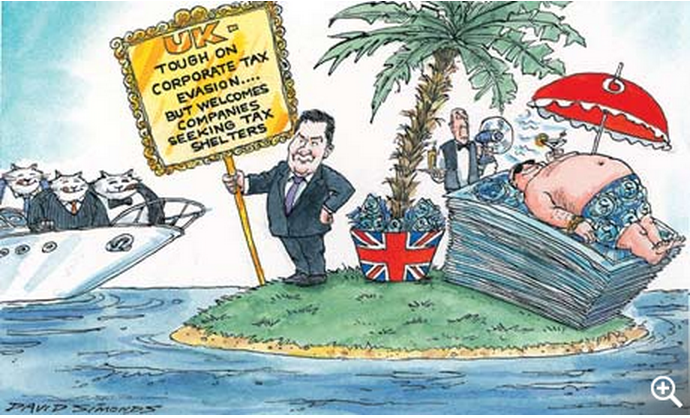 The sentiment is spot on: Cameron and Osborne talk tough on tax but let Vodafone off tax on its gains and at the same time a Tory organised filibuster (in which a minister took part) talked out the UK Corporate and Individual Tax and Financial Transparency Bill on Friday which is designed to tackle tax avoidance and tax abuse by greater transparency of the exactly the type Cameron claims to support, but which he clearly does not.

As the Observer noted on Sunday (echoing comments I have made, many times) that the UK has provided a:

crescendo of tax reforms that can be traced back 14 years to the then Labour government and the abolition of advance corporation tax, followed later by measures such as the introduction of SSE, and by further tax breaks on dividends (2009) and on foreign branch companies (2011).

More recently, George Osborne has been presenting corporate tax accountants with yet more sweeteners. These include more generous tax deals for research and development companies in the UK; a special low-tax regime for patent-owning businesses; and a fresh, multinational-friendly approach to offshore finance subsidiaries.

Add to that the chancellor's staggered reduction of the main corporation tax rate — scheduled to tumble to 20% by April 2015 — and the cumulative effect is starting to turn the heads of business leaders around the world.

It amounts to the creation of tax haven UK - form which move, it should be noted, Labour was not exempt, as I argued in 2007.

[T]he blossoming appeal of London to foreign multinationals has not gone unnoticed in Washington.

Cameron and the UK are increasingly part of the tax problem, not the solution, the Americans privately grumble. Justifiably so. Cameron and Osborne need to be more honest about their aggressive tax competition policies.

Absolutely right. And this is, of course, why the tax yield from corporation tax is forecast to fall in real terms in the UK over the next few years even as recovery is predicted. This is the table of forecast tax receipts from the March 2013 OBR projections:

Income tax increases by 30%, PAYE by 27%, self employed income tax by 47% (as more people are forced into marginal work, no doubt), national insurance by 30%, VAT by 22% and onshore VAT 9the bit excluding the offshore North Sea element) by just 8%.

That's not chance. And that's not flatline growth either or self employed income would not rise so much: no, this is the result of policy, tax cuts and incentives given to capital - none of which have produced a penny's return for the UK as yet, which is why Osborne has been reduced to creating a housing boom instead.

This is tax haven UK.