nPower’s tax and why 38 Degrees are right to protest

I am intrigued by an issue developing as a result of the discovery that nPower has not paid tax in the UK for at least three years, as disclosed on Monday by a parliamentary hearing, despite making £766 million of operating profit. 38 Degrees,  the campaigning organisation, has said about this:

Is Npower the new Starbucks? At the same time as hiking our energy bills, Npower are using accounting tricks to dodge paying their fair share of tax in the UK. Yesterday it was revealed that they haven’t paid a single penny in corporation tax for the last three years!

NPower’s accounting scam works like this: they are turning UK operating profits into accounting and tax losses by making large “interest payments” to other parts of their own business, based overseas. This is currently legal — and in the longer term, we need to push the government to close this blatant loophole. But right now we have a chance to force Npower to drop this scam — so please sign the petition now.

Initially nPower's defence to non-payment was this, offered by its CEO:

Mr Massara replied: 'We have invested £5billion in the last five years building power plants, creating jobs, creating employment and helping to keep the lights on.

'There is no mystery to it, there is no desire not to pay tax. The fact is you are allowed depreciation for your investments. And we have been the biggest investor by a mile in the renewable offshore business.

'If we had not made that investment, we would not have the (tax) deductibility that we would be allowed. That is a simple UK accounting rule.'

Now the defence is:

In response to the 38degrees campaign — this is not an “accounting scam”. Like almost every company in the UK, our business is financed by a mixture of equity and loan capital — this is standard business practice. We do borrow from our parent company, RWE — this is because the interest rates we pay to RWE Group are the same as, or often lower, than we would pay to a UK bank. This is not only perfectly legal, and something HMRC is fully aware of - it is common practice.

So what is happening here?

The first thing to say, simply because it is glaringly obviously true, is that nothing illegal is going on here, and as far as I can see no one has ever said otherwise. 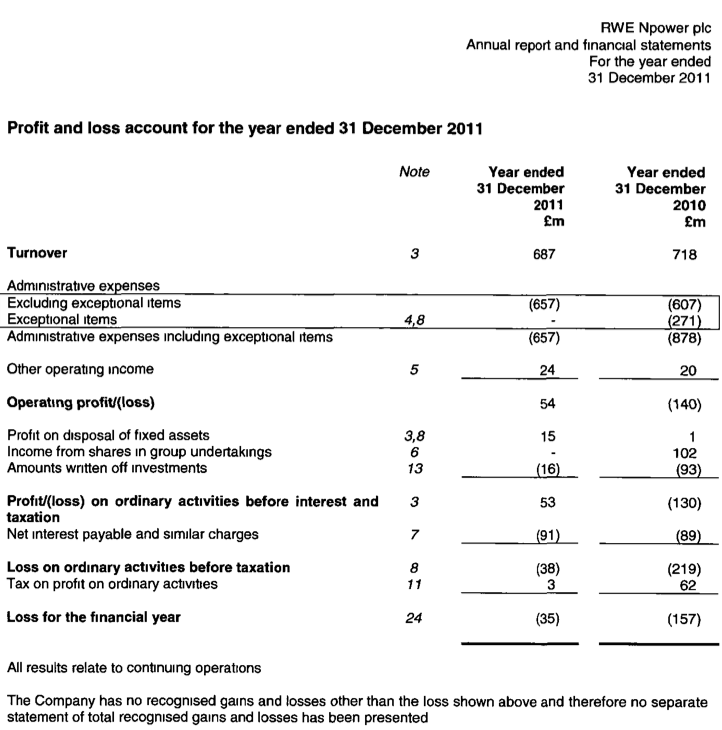 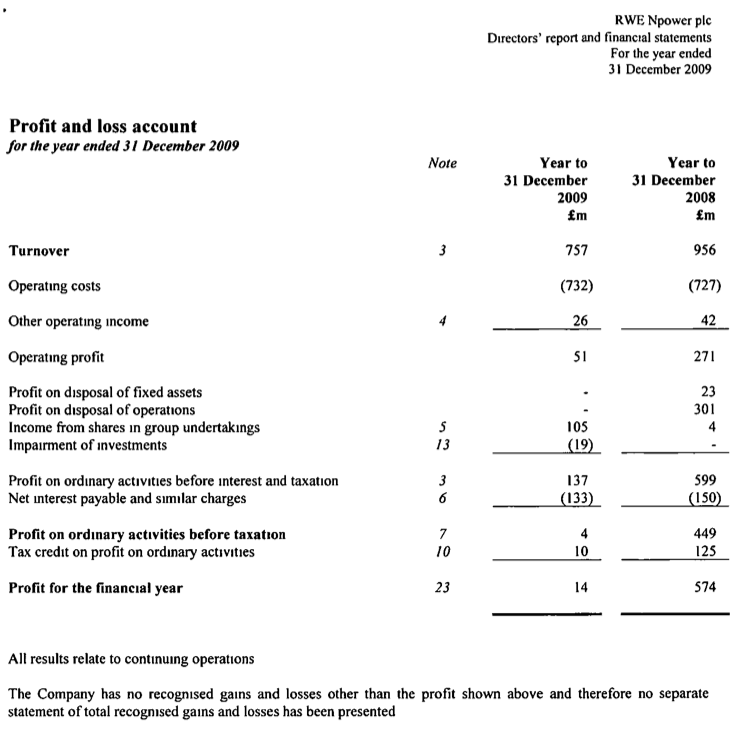 For some element of completeness this is the note on interest paid in 2011: 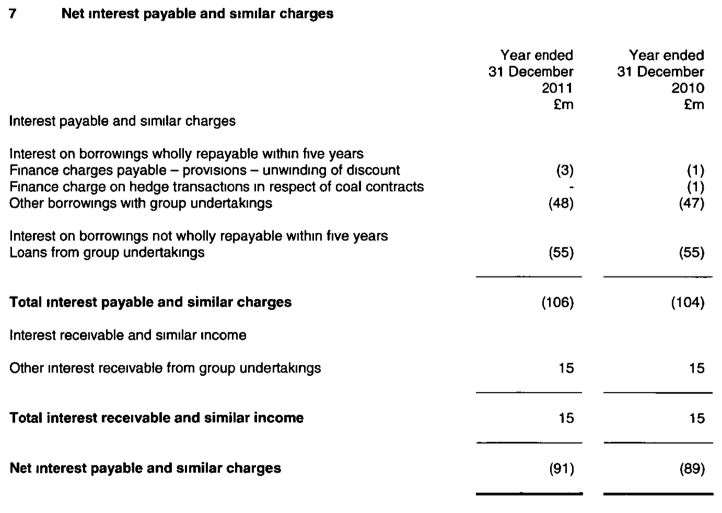 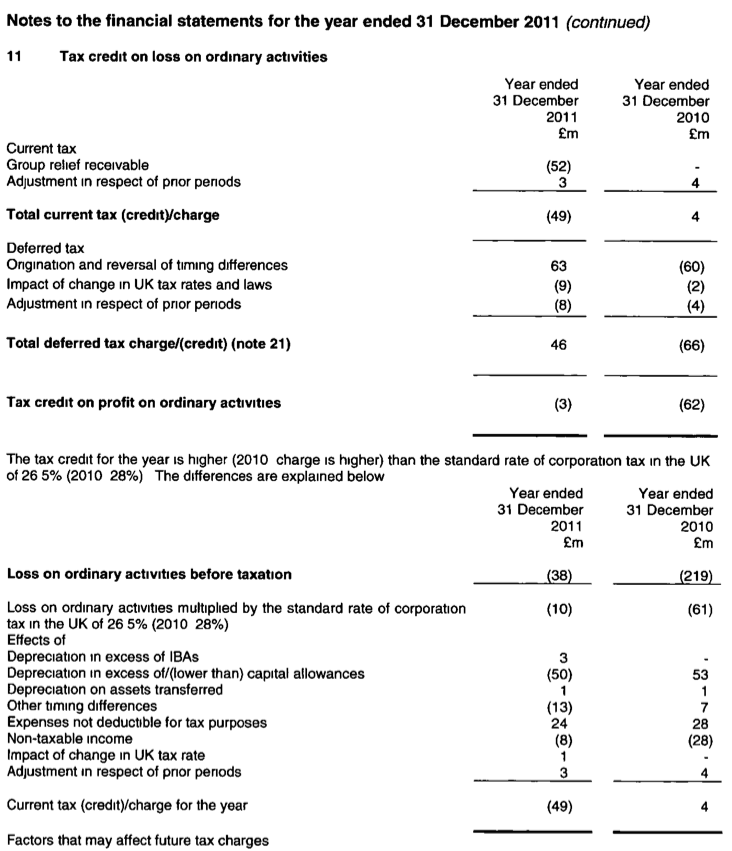 Please accept my apologies for a lot of data: sometime it's necessary.

So let's first of all look at the first claim nPower made, that their tax charge was being reduced by the effect of investment. The answer to that is to be found in that last item - the tax note, and in the line in the bottom of the two tables referring to 'depreciation in excess of / (lower than) capital allowances'. Note that in 2011 this is in brackets. That means in that year the tax effect of tax allowances on investment was to reduce the tax bill by £50 million because more was spent on investment than was charged for in the accounts. But the previous year the impact was the other way round - the depreciation charge in the accounts on investment was much more than the amount of tax relief on investment - increasing the tax bill by £53 million. Now I accept that in 2009 there was excess tax relief worth £70 million. But let's be clear, when this number can swing that much and almost reverse from one year to the next this investment is not enough to explain why over time the company is not paying tax, at least in full, as the first explanation nPower offered suggested was the case.

There are other explanations. First, in 2009 some tax losses reduced the bill, which is fair enough, although the reason for the loses has to be considered, which I do below, and for that reason I do not accept this claim at face value.

Second, in all years there was some non taxable income in the form of dividends from subsidiaries - non taxable because it is assumed the subsidiaries have already paid tax before making a dividend payment. This is indisputably acceptable.

But against that it offset £271 million of exceptional items in 2010 and, much more importantly, £313 million of interest paid (the charge was £133 million in 2009). Of this charge almost all was with group undertakings, as the note shows. In fact it looks like some £358 million was paid in interest to group undertakings (which nPower admit to be its German parent) over the three years. So, even if there had been no exceptional items, and ignoring the tax free income from dividends (which seems fair) on the core underlying trade as reflected by the operating profit nPower was actually structured so that the whole operating profit of  £235 million was bound to be cancelled by interest paid.

And that is the best explanation as to why this company is not profitable and does not pay tax. It's been designed to ensure that outcome.

Now it is of course up to a business to decide how it structures itself. That is a legal choice. But it's also a matter of fact that the UK tax system is remarkably generous in giving tax relief on the payment of interest - much more so than the German system is, for example. It's not true to say we allow all interest without question, but the latitude is very high. The result here is that by choosing to fund much of the UK business of nPower with loans on which interest is paid the profit that would otherwise be taxed in the UK is essentially  shifted to Germany where the interest is received and it appears as a result that nPower is a wholly unprofitable business in this country even though the operating profits indicate otherwise.

Now we've been here before of course: this is the Starbucks, Google and Amazon stories all over again. Everything is legal, of course, but the profits have moved location. And they clearly have in this case. nPower is not an unprofitable business, overall. Far from it, in fact. But because of decisions made on business structuring,  which are clearly very advantageous under the UK tax system, the UK loses out on all tax being paid by this company although Germany might benefit considerably.

So the question is, and 38 Degrees are right to ask it, is whether this is ethical? My suggestion is that it is not. If tax compliance is paying the right amount of tax (but no more) in the right place at the right time then I think the structure used means that tax is paid in the wrong place - i.e. in Germany and not here. And when this is a public utility servicing the UK consumer I think that is unacceptable. And in that case I think 38 Degrees are right to protest and to suggest that reform is needed to the Uk tax system to end this possibility. What is more, I think nPower, by offering an excuse for non-tax payment that simply does not consistently stack shot themselves in the foot and showed they had something to hide here.

So keep protesting 38 Degrees, I say. You got this right.