The Tax Justice Network has published new research into banks’ and Big 4 accounting firms’ global geographical reach and presence. Using data from our Financial Secrecy Index (FSI) project, the research (of which I'm a co-author) finds a positive correlation between the number of banks and the Big 4 firms of accountants in a jurisdiction, on the one hand, and the jurisdiction's degree of secrecy, on the other.

The research suggests that banks and Big 4 firms are likely to shift activity to locations with a high level of financial secrecy because profitable business opportunities increase in conditions of secrecy. Such patterns of behaviour mean that they are likely to facilitate the handling of illicit financial flows and/or fail to meet the required standards of behaviour expected by law or codes of ethics. In addition, it is argued, a high number of banks and Big 4 firms per capita in a jurisdiction results in them having a disproportionate political influence, which can lead to an increase in the financial secrecy offered by such places through law and regulations.

The research provides statistical and case study analysis, based on the FSI. Part one of the paper gives plenty of examples of questionable activity, such as major banks allowing different politically exposed persons (PEPs) to enrich themselves at cost to their people, and to hide their ill-gotten gains; Big 4 firms developing abusive tax avoidance schemes for their clients; banks facilitating cases of tax evasion among wealthy people; Big 4 firms giving their seal of approval to questionable annual accounts by auditing them with little scrutiny; banks engaging in regulatory non-compliance by opening bank accounts without properly applying AML rules; and banks and Big 4 firms investing considerable resources to influence policy makers to shape laws and regulations in their interests.

Part two of the paper presents statistical evidence comparing data from 71 jurisdictions included in the 2011 FSI and data from the G20 countries. Within all 71 jurisdictions analysed for the FSI, the highest numbers of banks and Big 4 firms per 1,000 inhabitants are found in notorious secrecy jurisdictions or tax havens. 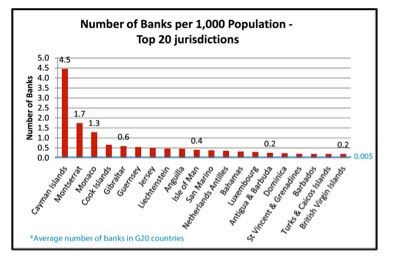 The graphs illustrate that there is a substantially higher number of Big 4 offices and banks per head among the top 20 FSI-jurisdictions than there is in G20 countries, exceptionally in excess of their domestic banking and accounting needs. 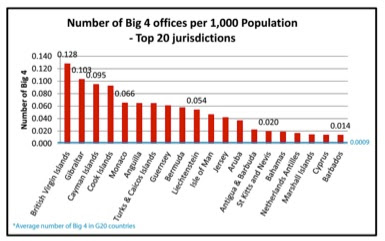 While this observation provides a first indication for a correlation between the number of banks/Big 4 and the level of secrecy of a jurisdiction, this correlation is further corroborated by comparing the secrecy score given by the FSI to a jurisdiction on the one hand, and the number of banks and Big 4 on the other. The following graphs show that the 20 jurisdictions with the highest numbers of banks and Big 4 offices per head are those with the highest secrecy scores as measured by the FSI 2011. 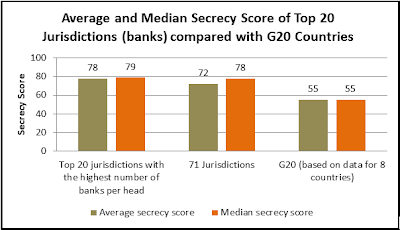 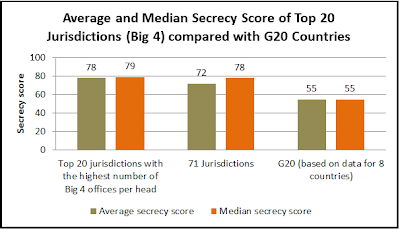 This research lets us conclude that working in conditions of secrecy has become an inherent part of the work of bankers and accountants. It suggests that this has led to a culture of creative non-compliance with laws and regulations, which is likely to increase the potential for, and volume of, crime. At the same time, banks' and Big 4 firms’ lobbying for laws and regulations that reduce transparency is likely to have resulted in further opacity in the world’s financial system.