I have published a new paper this morning as part of the work I am doing that is funded by the Polden Puckham Charitable Foundation on how to pay for a Green New Deal. In it I ask whether Mervyn King was right to suggest, as he has, that quantitative easing has inevitably resulted in inflation. As the introduction notes:

There have been widespread reports that Mervyn King, the former Governor of the Bank of England is now deeply critical of Andrew Bailey, his current successor in office. King’s claims appear to be threefold.

First, he is suggesting that the Bank of England was far too willing to use quantitative easing during the COVID crisis, with it in effect funding government expenditure during this period.

Second, he says that this willingness to create new money during this period has now led to the current inflation crisis.

Third, it is King’s suggestion that the Bank of England realised this far too late, and therefore reacted too slowly to the onset of the current inflationary period, failing to increase interest rates at the time when King suggests that this was required. Quite when that was is not clear, but it was definitely before they acted.

Add this all together, and what King is really saying is that if you print money you get inflation[1]. Unsurprisingly, this simple notion which has long been beloved by right-wing politicians has now won support and amplification by those politicians and media friendly to their cause. The obvious question to ask in that case is whether King is right?

I would not, of course, have written the paper if I thought he was. What I assemble is data that shows that although QE clearly did increase the money supply it did not in any way influence inflation upward. Indeed, there was no hint that inflation might take off until the autumn of 2021 when it was very apparent that it was other factors (Covid reopening, supply chain issues, war, sanctions, energy company profiteering, etc) that very obviously created the situation we now find ourselves in.

That research is in part based on long term inflation data, including this from the Bank of England via the St Louis Fed: 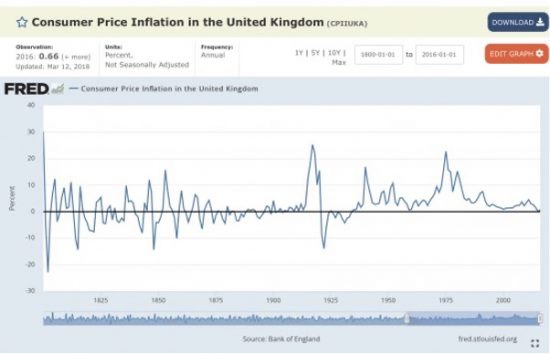 The QE period has not been inflationary: it has been exceptional for its stability.

There is more evidence on this from inflation data from the World Bank that I have analysed. Take this data for the OECD: 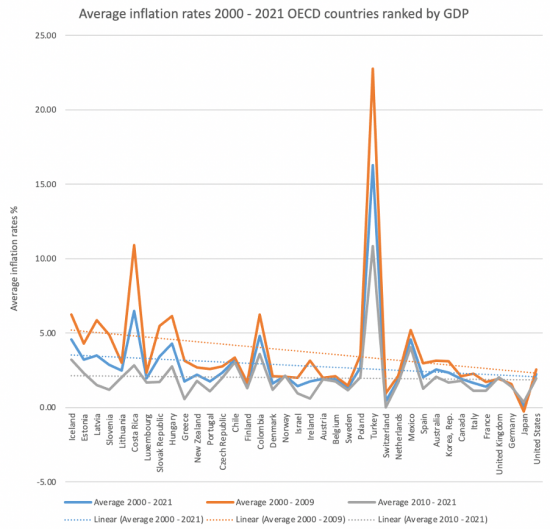 From 2000 to 2009 inflation rates were markedly correlated with the size of an economy. From 2010 they have been stable and lower for eleven years. The QE era delivered stability. As a result I suggest it is impossible to claim that an eleven-year lag suddenly reversed in late 2021 when other causes of inflation are so easy to find.  Money creation was not the cause of this problem.

What do I suggest as a result? This:

If Mervyn King has got everything wrong about inflation, as has the Bank of England, what should be done? I suggest the following:

As this note shows, the claim made by Mervyn King that quantitative easing is the cause of the current inflation in the UK is wrong. The facts do not fit his case. The economic theory he uses does not fit those facts. His prescription is as a result also wrong. In fact, what he would do if he succeeded in having his way would make the economic situation in the UK very much worse. That is why we have produced this note.

Constructive criticism is, of course, welcome.

[1] Kings claims can be found here  https://news.sky.com/story/cost-of-living-bank-of-england-shares-responsibility-for-crisis-former-governor-says-12617190. The most detailed discussion of what King actually said in the Sky interview is here https://moneyweek.com/economy/uk-economy/603604/quantitative-easing-too-much-of-a-good-thing. Other coverage is at https://www.theguardian.com/business/live/2022/may/20/retail-sales-inflation-consumer-confidence-thg-ftse-economics-business-live; https://www.independent.co.uk/business/central-banks-drove-inflation-by-printing-money-says-former-bank-boss-king-b2083627.html; https://www.spectator.co.uk/article/mervyn-king-needless-money-printing-fuelled-inflation and https://www.euronews.com/next/2022/05/20/britain-boe-king

[2] This is clearly not a long term policy That would require that  the cost of fossil fuel energy change to price it out of the market.