A couple of weeks ago I highlighted the fact that the Institute of Chartered Accountants in England and Wales (of which I am a fellow) had made more than £55 million from audit fines, largely over very recent years, because they are, quite bizarrely, the beneficiary of the penalties charged on Big 4 audit firms (PWC, EY, Deloitte and KPMG) who seem unable to undertake their audits correctly any more.

I asked them what they were going to do with these funds and was told, via Twitter: 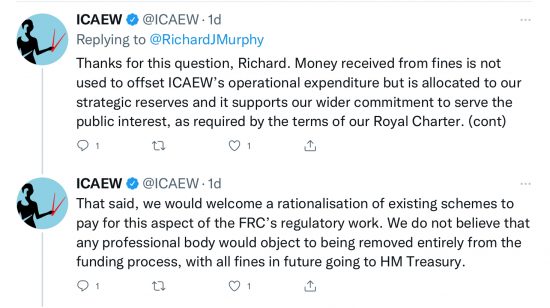 Today there is news that the ICAEW has now picked up another £5 million in fines, as the Guardian reports:

PricewaterhouseCoopers has received penalties totalling £5m for failures in its audit of the construction firms Galliford Try and Kier, in the latest fines imposed on a “big four” accounting firm.

The Financial Reporting Council, the accounting watchdog, also imposed a £136,000 fine on the head of PwC’s construction division and issued severe reprimands to PwC, which it said had failed to adequately scrutinise long-term contracts at both builders, among other failings. It ordered the firm to review its audit work of listed companies that rely on long-term contracts.

The PWC failing is basic. There is no excuse for not getting such accounting right. But what still intrigues me is what the ICAEW is going to do with these funds, which now exceed £60 million in total.

When are they going to say what the use might be?

Might some research into what the public interest in accounting in the 21st century might be represent one socially relevant use of the funds?

POST SCRIPT: The ICAEW has now advised that these fines will be going to the Treasury as they are under a different scheme to that from which the ICAEW benefits. The point of principle remains , however.