This comes from page 182 of the Kindle edition* of the new Bank of England book on economics, which is in the chapter explaining the virtue of banking: 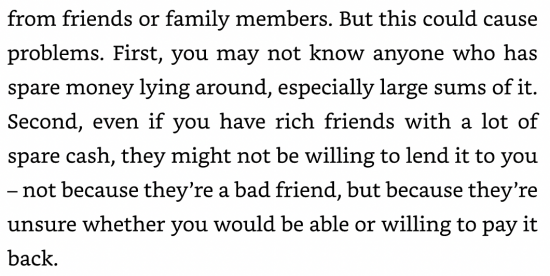 a) Money is tangible when it is not;

b) Banks lend other people's money when they don't; they always create loans out of thin air;

c) Banks are intermediaries when they are not, which the Bank of England has acknowledged  since 2014.

I admit that in the previous chapter it was explained that banks could and do create money out of thin air. But then we get his nonsense - which heads straight back to the old textbook teaching about banks as intermediaries. Not only does this contradict the previous chapter (never a good idea in a book) it is also wrong.  Banks in the UK - the target audience for this book - do not act as intermediaries. They never match savers and borrowers. The suggestion that they do so is just wrong and is deeply misleading. 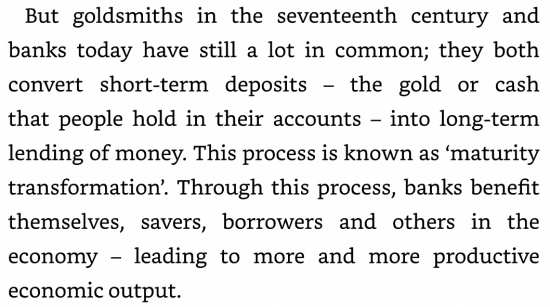 This is just drivel, to be polite. If banks do not need deposits to lend - and they do not - then this is total nonsense.

The Bank of England really should understand banking before they publish a book about it.

And for the record, they should follow their own advice. In 2014 they said in an article:

This article explains how, rather than banks lending out deposits that are placed with them, the act of lending creates deposits — the reverse of the sequence typically described in textbooks.

Now they have published their own textbook and then have done so using the out of date model of banking that they condemned as wrong in 2014. It's very hard to make incompetence on this scale up.

And, for the record, they also don't understand money. They never once note that it is a record of debt.

This is really grim stuff.

* Bought so that I could screenshot it.