I spoke this week at a conference organised by PricewaterhouseCoopers on the legitimacy of tax systems. The conference was held under the Chatham House rule and as such I am not reporting what was said. I am, instead focusing on one particular issue that I raised.

My presentation focused upon the need to understand the tax system as a whole. As I explained tax is one of three or four funding streams for government spending, which I refer to as G in what follows. The funding streams are:

This is an accounting identity: as a matter of fact, it must be right.

What this does, of course, mean is that it is impossible to say that tax funds government spending. However, it does not mean that there is no relationship between tax and government spending because there very clearly is. What the identity describes is a system in which tax, money creation, government deposit-taking and spending all co-exist in intimate relationship. Those relationships are macroeconomic, and what is clear is that if the system is properly viewed as a whole both fiscal and monetary policy are involved.

That is because, as I also explained, once tax is liberated from the idea that it is a funding source there are six reasons to tax:

When asked to suggest how the legitimacy of tax systems could be improved my suggestion was straightforward. I proposed that PWC should, if it was committed to this issue, publish an explanation of how tax systems really work, and then provide detail of how tax fitted into the government financing cycle of every country in which PWC works – which is around 160 jurisdictions. This is data that they do, of course, have to know to work and offer advice in such places. The data would explain these processes: 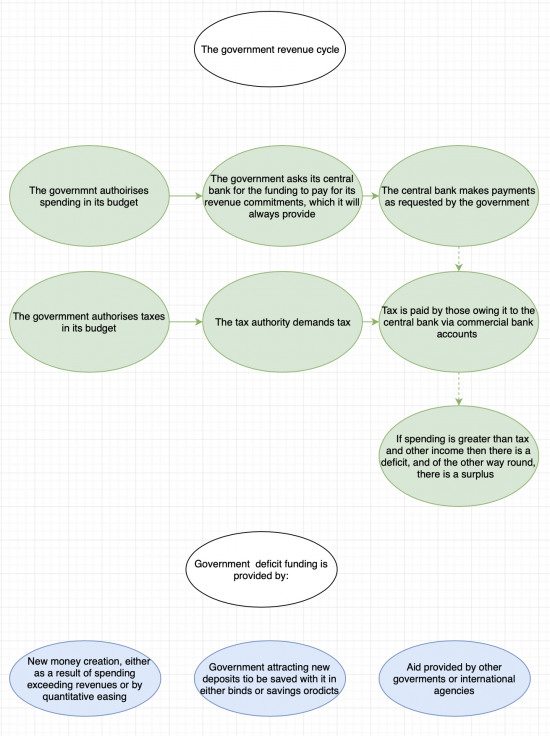 The items highlighted in green are, in effect, an expenditure and income account. Breakdowns by type of income and expenditure would, of course, be required. Those in blue explain the funding used for this process and so form part of the balance sheet (capital, for money creation; liabilities for deposit-taking and equity via the income statement for aid).

Importantly, the accounting and decision-making processes with regard to tax revenues should be explained. This is a multi-stage process:

This provides the basis for some tax decision making, presuming you understand the rest of the funding cycle. I suggest PWC should or could make best estimates of these figures, or indicate why it is not possible to do so, as a result indicating areas of required reform that would be of use in itself.

Combining this data with that in the chart of the government revenue cycle what we would then know is:

This is, of course, no more than requiring a government prepare a set of accounts. If multinationals can do this it is absurd that governments cannot. And if a government does not prepare such accounts then best estimates are needed to inform tax debate, not least to embarrass them into action by requiring that they do these things.

And then if you want really informed decision making you would add in tax spillover analyses. These, in the form designed by Andrew Baker and me, examine how a tax system undermines itself, for example by offering differential tax rates that encourage avoidance, or by underfunding of the tax authority that encourages evasion. It also explores how the tax system is undermined by other jurisdictions, and how in turn it might undermine them. The result is not just a risk rating, but also a clear plan of action for things that need to be addressed.

My suggestion to PWC is that they could massively increase understanding of tax by explaining all this. And they could as a result provide a massive public service by promoting the understanding of tax in its full context and by providing data, wherever possible, by jurisdiction so that better tax decision making could take place right across society.

Of course, PWC might say this is too hard, but I really would not believe them: if they do not have this ability then no one has, and I believe it is possible to make these estimates. I would understand though if they wanted to cooperate with others. I, for one, would be more than willing to partake. Critically, the aim would be to make this detailed, but still accessible.

I am hoping that this is an idea that they might just think is worth pursuing.  I am sending this post to PWC.