I share this speech from the former Lord Chief Justice Lord Judge (yes, he really was Judge Judge), given to the House of Lords this morning in which he demands that the next time the government seeks to erode the powers of parliament the Lords must, as he put it, chuck the demand out.

Referring, in the rather coded language of the Lords, to Wat Tyler, John Lilburne and Oliver Cromwell, he is talking of the great English revolutionaries and is saying it is time that the Lords sided with and joined them in rejecting the actions of the government in the name of the Crown.

This is extraordinary, to say the least. And to confirm my assessment, Lord Anderson of Ipswich - another eminent lawyer - has tweeted: 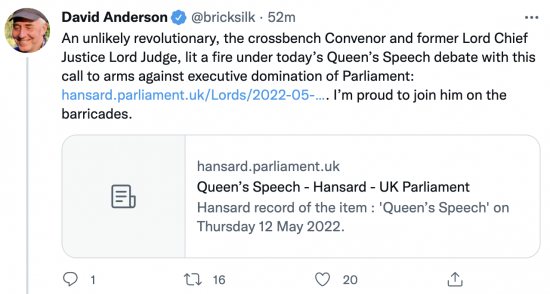 And, so to that speech:

My Lords, listening to the gracious Speech I heard words that filled me with joy:

“Her Majesty’s Government will ensure the constitution is defended.”

Then I listened, as one does:

“Her Majesty’s Ministers will restore the balance of power between the legislature and the courts”,

and I thought, like the editor of Private Eye, “surely some mistake”.

There is no balance needed. We legislate—we try to legislate with clarity—the courts interpret our legislation and, if we do not like the way the courts have interpreted the legislation, it comes back to us and we put them right. There is no difficulty about that relationship—perish the thought.

I thought the words were going to be, “Her Majesty’s Ministers will restore the balance of power between the legislature and the Executive”, because that is the relationship that needs to be addressed. Noble Lords have heard me bang on about Henry VIII powers. I just do not like a Minister by statutory instrument being able to revoke primary legislation, let alone secondary legislation. As for skeleton Bills, I find it absolutely extraordinary that we ever pass them. We say to ourselves: “Let us give the Minister powers before the Minister has the slightest idea how he or she is going to exercise them.”

Two of the most important pieces of work in the last Session were the reports that we received from our Secondary Legislation Scrutiny Committee, Government by Diktat: A Call to Return Power to Parliament, and from our Delegated Powers and Regulatory Reform Committee, Democracy Denied? The Urgent Need to Rebalance the Power Between Parliament and the Executive. That is what I thought I heard, or at least what I hoped I had heard, during the Queen’s Speech. I apologise for my disloyalty in thinking there may have been some misreading of what was in the text.

These were not a bunch of sparky students nor even eccentric academics. They were two of our own Select Committees repeating warnings that they have given and which the Constitution Committee has been giving us for years. They were cross-party and always unanimous. The noble Lord, Lord Hodgson of Astley Abbotts, will be speaking about his own committee’s report in due course, but as we look at him—forgive me—do we see Wat Tyler or John Lilburne? Do we see Oliver Cromwell? Actually, no, that must be the noble Lord, Lord Blencathra. What about the noble Lord, Lord Lisvane? He is another of them. These are committees of this House carefully addressing a prime issue of constitutional importance.

As I say, the noble Lord, Lord Hodgson, will no doubt discuss his committee’s report, but we have a response from the Minister. The Secondary Legislation Scrutiny Committee returns to the issue of the growing imbalance between Parliament and the Executive and, with commendable reticence, it notes that in the Government’s response almost all of its recommendations were rejected. I bothered to read the Government’s responses and I respectfully suggest to the noble Lord, Lord Hodgson, that the words that his committee used in response were very modest; I would say that it looked like hitting your head against a brick wall. There was no understanding or insight whatever into these major issues that the two committees have raised.

In the Conservative manifesto there was a promise that there would be a first-year commission on the constitution, democracy and rights. Where is it? Why are we not addressing the issue of this imbalance now in such a commission?

I am now about to be very courageous, particularly with the noble Lord, Lord Strathclyde, here: what is the point of us being here if, when we identify a serious constitutional problem, we never do anything about it except talk? We cannot keep doing that. I just want us to consider the possibility that the next time we have a Henry VIII clause in a Bill that has not been given careful explanation in advance, we chuck it out.

This is where the noble Lord, Lord Strathclyde, is going to be very troubled. Is it not possible that some time, instead of a regret Motion, if a statutory instrument proposes the extension of undue power to the Executive, we throw that one out too? I am only asking your Lordships to consider the possibility—otherwise, why do we not just go on talking?