To describe today, and the decisions that will be taken during its course, as pivotal to not just what happens in 2022, but to the longer-term with regard to the political economy of this country, is an understatement

I apologise for being the bearer of bad news on this last Sunday before Christmas, but the current economic outlook is dire.

I base this gloomy prognosis on the report of SAGE - the Scientific Advisory Group for Emergencies. They published a new report yesterday evening, although it was presented to the government on 15 December. The report is unambiguous. In the summary they say:

SPI-M-O has considered an updated range of scenarios from 2 academic groups who have modelled the impact of Omicron transmission on trajectories of infections, hospitalisations, and deaths. These groups suggest it is almost certain that there will be a very substantial peak of infections (much larger than occurred during January 2021). There are highly likely to be between 1,000 and 2,000 hospital admissions per day in England by the end of the year. Many of these hospitalisations are already ‘in the system’ due to the lags between infection, symptom onset, and the subsequent need for health care. The recently announced expanded and expedited booster vaccination programme will not affect transmission and severe and mild disease in time to mitigate these hospitalisations for the rest of 2021.

Scenarios that assume no further restrictions beyond Plan B generally lead to trajectories in daily hospital admissions in England that have a minimum of 3,000 hospital admissions per day at their peaks, with some scenarios having significantly worse outcomes during the first few months of 2022. To prevent such a wave of hospitalisations, more stringent measures would need to be implemented before 2022.

I have added the emphasis but in other parts of the report they added similar emphasis to make the same sort of points.

In the first scenario existing precautions are maintained. No significant behavioural change is assumed. The second scenario is the reimposition of social distancing, much wider enforce mask-wearing plus outside drinking and eating, but no proper lockdown. The third scenario effectively assumes a return to a lockdown.

Midpoint admissions to hospitals are

The NHS has a capacity of 140,000 beds at most, which will be massively challenged by Covid restrictions and staff ill health which is already running at very high levels. The likelihood that it can handle 3,000 Covid admissions a day on top of other work is very low. This is data to date from the UK Covid tracking website: 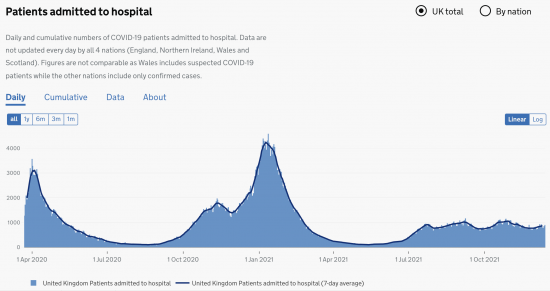 There was a brief period in January 2021 when admissions hit almost 4,000 a day. That was exceptionally difficult to manage, and this might now be the best-case scenario for 2 to 3 months.

Deaths are off previously known scales. Again I note mid-points:

This is data to date:

The January 2021 peak might be sustained for two months.

It could also be very much worse. Indeed, without action being taken the messages and ambiguous. Deaths will happen at an unprecedented rate. A simple extrapolation of the scenario A data (and I know all about the risks of doing this) suggest that 200,000 deaths might be possible.

If you can brace yourself for it the rest of the report is worth reading. This might be key:

To significantly reduce the peak of such a wave, more stringent restrictions than the current Plan B measures would be required. To illustrate more stringent measures, groups have modelled impacts comparable to Step 2 or Step 1 of the Roadmap for England. These scenarios suggest that, if sufficiently stringent and enacted early enough, measures and or behaviour change would not need to be in place for more than a few weeks to substantially reduce the potential peak in hospital admissions and infections compared with Plan B alone. The timing of such measures is crucial; if implemented late, it is less likely that these would prevent considerable pressure on health and care settings.

Reducing the total number of infections and delaying any wave in the very short term would allow more time for the accelerated booster roll out to take effect. This would also allow many hospitalisations to be prevented as a result, not just delayed.

The first emphasis is mine, the second was theirs.

I have little doubt that SAGE required that this report be published now to protect them from the personal risk that they might be prosecuted in the future for failure to act when it was possible to do so to prevent death, long-term illness and major impact on society. If that was their motivation, then I can entirely understand it.

I also suspect, however, they also wished people to know what they expected the government to do. They are demanding further action to prevent the spread of disease now. What they are saying is that there is no possibility of delaying that action: time is of the essence. As the paragraph that I quote also makes clear, what they are saying is that unless that action is taken then people will die unnecessarily as a direct consequence of the failure to take appropriate action at this moment.

Despite this, as I write, Sajid Javid is touring television studios declaring that no further measures are required. Of course, with this government that means nothing. It U-turns so often that a denial this morning could well be the precursor to the action this afternoon, but as yet the man responsible for healthcare in England is saying that in the light of this evidence he does not think that action is needed.

I record this for two reasons. Firstly, because I think that the record requires that I do so. Like SAGE I need to be able to say at some time in the future that I appreciated the scale of the crisis that we were facing, and demanded action. Second, and much more significantly, what this forecast data suggests is that we are going to face a larger economic crisis in 2022 than any that we have faced over the last two years. SAGE is unambiguous. They are saying that this is the worst wave of Covid yet and that we are in a much worse position than we were in March 2020.

I interpret that in three ways. Firstly, in the short term, the sheer scale of sickness that is going to sweep through the country is going to create economic mayhem.

Secondly, unless the government acts to protect people from the consequences of this then this will be catastrophic for the economic health of people, employers and the country as a whole.

Third, this does then require action immediately. People have to know what is expected of them, and that they can rely upon the support of the government so that they can afford to act in an appropriate manner, including with regard to the change in their plans for Christmas, if those are required.

That then leads to the necessary conclusion of this discussion (there will be others to follow, particularly on what the government should be doing now) which is that unless the government acts today to lock down the country to protect us from the risk of extraordinary consequences from this crisis those making that decision should be culpable for the deaths that follow, which they now know are preventable.

To describe today, and the decisions that will be taken during its course, as pivotal to not just what happens in 2022, but to the longer-term with regard to the political economy of this country, is an understatement.

And I am not optimistic.