Consigning the sterlingisation zombie to history

It is big news when an issue to which this blog has contributed makes it to be an FT headline, but it happened this morning: 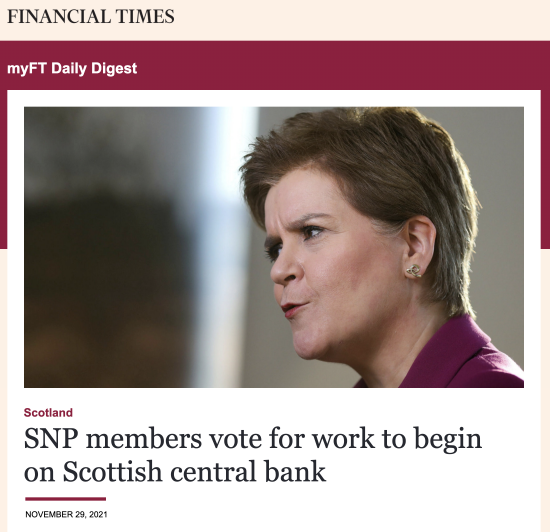 Of course, the credit goes to Dr Tim Rideout who spearheaded this campaign, and got the resolutions passed with a majority of 418 to 37, despite warnings being given to the conference that a country having its own currency as a 'dangerous experiment'.

Tim has shared his speech with me. This is it:

In April 2019 you rejected the Growth Commission sterlingisation proposal in Appendix C.

You voted instead that Scotland should start the preparations for our own currency.

You wanted that to happen as soon as possible after a vote for independence.

The aim was to introduce our new currency as soon as practicable after Independence Day.

This recognised the fact that no advanced economy has ever sought to use the currency of another nation. To try to do so would be to start probably the most dangerous experiment in global monetary history.

So, we need to follow the tried and trusted safe route taken by almost every country to become independent, and that is to have our own currency.

We will use the Scottish Pound – and not the English one.

Having a central bank is a key component of having our own currency. It is also a pre-requisite for applying to rejoin the European Union. Using sterling rules out any EU membership application. So we must plan for that too.

Planning is key. After the Brexit vote London was in a ‘what do we do now’ state of total unpreparedness. It would be inexcusable for us to find ourselves in a similar position when we win Independence, however that is achieved. We will need to be ready, so we hit the ground running. Two years, or whatever it turns out to be, for a transition to Independence Day will go very quickly.

On the currency front there are things we can do now. One of those is to draft the bill to establish the Scottish Reserve Bank as the new central bank of Scotland. That gets us to the point where we are ready to introduce that legislation the day after we vote. Bear in mind it will likely take six months to be approved by Parliament.

The resolution before you is a very truncated version of what Dalkeith Branch submitted. Conference Committee deleted two thirds, namely clauses A to F of the principles for that draft bill. As those are the key elements, I will explain them briefly to you. They are important.

Critically, the Reserve Bank will be owned and controlled by the Scottish Government. It will be the monetary authority, meaning it will create Scottish pounds. It will own the Scottish payments system, and it will be banker to the State.

Vitally, we need to ensure it is under the control of Parliament and answerable at all times to us and our elected representatives. That means things like US style confirmatory hearings for the appointment of the Governor, annual reports, and appearances before parliamentary committees. Accountability is key.

That is because as the monetary authority it will establish and issue the new Scottish currency. It will also set interest rates for lending to commercial banks, and it will work in collaboration with other international central banks. That means it will hold and manage our foreign reserves on behalf of the Finance Ministry.

At home, it will maintain the Scottish Government’s accounts and will provide such loan and overdraft facilities as are required to achieve the government’s fiscal policies, such as full employment and the Green New Deal.

Lastly, as envisaged by Douglas Chapman MP, it could manage a Scottish Sovereign Wealth Fund.

The Amendment to the resolution provides a forum to discuss those principles and I would urge you to support that.

In nearly 50 talks around Scotland, it is clear to me that you, Delegates, know that there is only one choice. That is our own currency. Let us start that process now, by voting in favour of the resolution.

But, I also note that the FT reports:

Asked after the vote, the SNP said: “The currency of an independent Scotland will continue to be the pound sterling until a new currency can be safely and securely established in the interests of the whole economy. A Scottish currency will be introduced as soon as practicable after independence.”

That is not exactly a warm endorsement of what the SNP membership had clearly indicated to be their wish.

I leave the last word to Tim though. As he noted in a Tweet:

I hope the sterlingisation zombie now has a stake through the heart.

I can but agree.