Note to Nadine Dorries: there is no such thing as taxpayer’s money

It was in 1983 that Margaret Thacher told a Tory Party conference that:

There is no such thing as public money; there is only taxpayers’ money.

She was wrong, of course, The exact opposite is true. All money is created by the government. Taxpayer's merely used government created money.

This, however, has not stopped Nadine Dorries from spouting the same nonsense:

C4 borrowings sit on the Gov balance sheet. Gov has no money of its own, it’s tax payer derived. This is part of the debate re privatisation decision/ future sustainability. https://t.co/502ECFf1SA

Let's leave aside that as the minister responsible Nadine Dorries did not know how Channel 4 is funded.

Let's leave aside too that just because something is on the government balance sheet it must be moved off it, as she clearly implies.

Let's just deal with that 'the government has no money of its own' argument.

This is very obviously untrue. Let me illustrate this with a chart from a recent report from the New Economics Foundation: 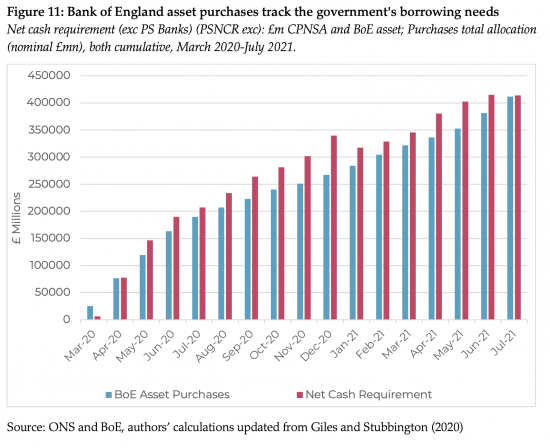 The Covid crisis was not funded by taxpayers or so-called taxpayer's money. It was funded with money created by the Bank of England using the quantitative easing process that matched the government's deficit. No supposed taxpayer funding was involved, at all. And, as the Bank of England has now admitted, most of this new money will never be cancelled, or be repaid to use the common parlance. In other words, the government created the money it spent.

And that is what happens every day, whenever the government spends. The only reason to tax - and get the public involved - is to reclaim that money to prevent inflation from occurring. But, in itself, tax never, ever, pays for government spending.

There is no such thing as taxpayer money in that case.

And there is no trust arrangement between the government and taxpayers for that reason.

That does not mean there is no reason for a relationship of trust between taxpayers and the government. There is, as I explain here, although I would update that argument now. But it is not tax funding government spending that creates that trust. I explain it better in this video. Maybe Nadine Dorries should watch it.