A Tory Prime Minister commands the absolute support of his party until the moment that they do not, and Johnson can only humiliate his MPs so often before they’ll have had enough of his corruption

There is universal condemnation of the Tory vote to find MP Owen Paterson not guilty of offences he very clearly committed yesterday. When the Mail says this the government clearly has something very wrong: 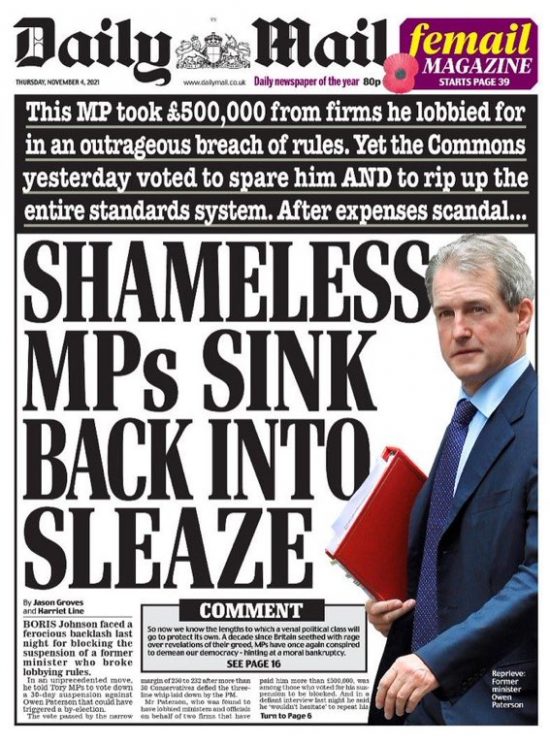 Sleaze killed John Major's government. It could kill this one too.

There's a particular reason for that. No one in Tory ranks really gave a damn about the fate of Owen Paterson. But this vote was never about him, excepting one thing, which was that he faced the threat of recall and a by-election as a result of this sanction. As the Guardian notes:

Johnson whipped his MPs to halt Paterson’s parliamentary suspension and demand a review of the entire standards process to allow for appeals. Johnson is himself facing what would be a fourth inquiry by Kathryn Stone – the parliamentary standards commissioner – this time over refurbishments to Johnson’s Downing Street flat that were initially paid for by a Tory donor.

This vote was all about saving Johnson, who clearly knew how likely it is that he too would be sanctioned by proper due process and wanteded to stop it in its tracks as a result.

As Robert Shrimsley in the FT puts it, as a result:

The British system relies on the readiness of all sides to accept the rules even when doing so is uncomfortable.

By his actions Johnson has shown contempt for the system and swept away another check on the power of the government and its friends. It is a shameful and damaging day for British politics.

A blatantly corrupt Prime Minister wanted to save his own skin - and thought this the way to do it.

Now we need to bring that blatantly corrupt Prime Minister to account for his blatant corruption.

A great many Tories might be thinking that the right thing to do this morning. As is well known, a Tory Prime Minister commands the absolute support of his party until the moment that they do not. A great many Tory MPs will be feeling profoundly uncomfortable today. Johnson is pushing his luck very hard. Sometime he will go too far. At this rate that may be soon. He can only humiliate his own party so often before they will have had enough of him. Let us hope that is soon.