The Office for Budget Responsibility is a really terrible economic forecaster

Much of my criticism of the Budget has focused on the reliance it places on wildly optimistic economic forecasts. In that case it is worth looking at the track record of the OBR as a forecaster.

They did this themselves in 2017. That document included this chart: 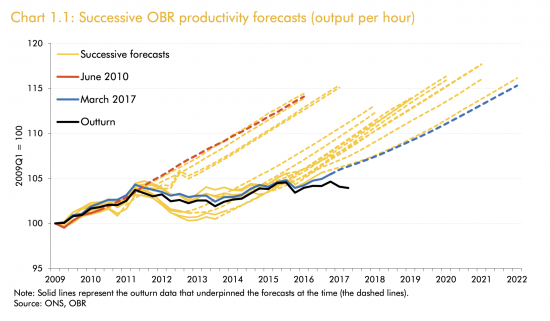 Since it is productivity growth that drives much of the OBR growth forecasts this staggering record of over-optimism is significant.

The simple fact is that the Office for Budget Responsibility is not what it claims. It is not independent. It is not even an office; it is a unit in the Treasury. And it is not objective; it supplies the forecasts a Chancellor wants.

Yesterday the Chancellor wanted growth to make his claims work. That is what the OBR delivered. But their spreadsheet is not reality. Only Sunak thinks it is. All Chancellors do until the cold leather of the backbenches reminds them how unwise they were to believe the promises made by the geeks with a supposed forecasting tool that actually delivered numbers on demand.