None of Rishi Sunak’s assumptions on what’s going to happen in the economy look credible: brace yourself for the recession to come

For those of an economic persuasion, the Office for Budget Responsibility provides a single table in its Budget documentation that summarises the assumptions that they make that underpin the Chancellor's announcements. This is is it for today's Budget: 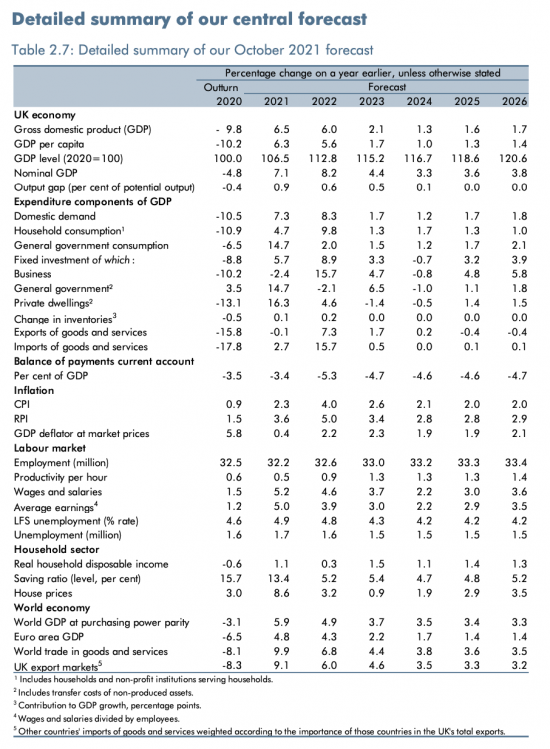 Please do not be daunted by all the numbers: I will talk you through the important ones in this post.

The first, and in some ways the most important estimate, is that for the UK's GDP, or gross domestic product. This is an estimate (and not a very good one) of our national income. You will note that this collapsed in 2020 by 9.8%. This year it is forecast to increase by 6.5% and then next year by 6%. As a result it is now assumed that we will get over the Covid crisis in just two years. After that growth rates will be at the usual rather modest rate that the UK aspires to.

Many might think that this is fair. After all, we were bound to recover at some point from the collapse that Covid created. However, this rate of recovery is significantly stronger than that forecast in March 2021. The difference is explained by the Office for Budget Responsibility now thinking that the Covid crisis is over.

The government has, of course, since May 2021 wished people to believe this with the supposed complete reopening of the economy taking place in July 2021. But, as we now know, as a consequence we have vastly more Covid cases, Covid hospitalizations and Covid deaths per million people in our population than any other country in Europe. The difference is not small, either: our  Covid crisis is vastly worse than anyone else's. Given that there is almost universal medical agreement that the government should have already taken action to increase Covid protections, and given that there is similar agreement that every delay in doing so will make it more likely that we will have to lockdown again to tackle the problems arising, what is the likelihood of this assumption being wrong? I would say that it is very high. in that case, this whole budget falls apart. I think that is what will happen. I am not expecting to see GDP figures anything like those forecast here.

Let me then explain why those figures are also unlikely for other reasons. In particular, look at the percentage change figures for government expenditure. Almost all the growth in 2021 came because of a growth in government expenditure and the boost that the housing market has given to the economy. Both are forecast to collapse in the next year. In its place it is suggested that business investment will drive growth. As I have already explained, in another blog, the likelihood of this is exceptionally low because business almost invariably borrows to fund growth, and right now business is completely maxed out on borrowing with few banks being willing to lend motor business that is already under that stress. The chance that this forecast is right is, then, exceptionally low.

It is as unlikely that increased domestic consumption is going to happen right now.  What we already know is that UK households are actually cutting their retail spending at present and with inflation likely, and with the Bank of England expected to increase interest rates with the deliberate intention of further curtailing that spending, the chance that there will be the forecast increases in domestic demand is miniscule.

I would suggest that the growth forecasts are, therefore, exceptionally unlikely to be realised.

There are a few other things to note. The first is that inflation is not expected to last. In which case, why is the Bank of England reacting?

Second, unemployment is expected to fall. If growth does not happen I think that unlikely, just as I think that the forecast start point is also understated.

Third, note the assumption that there will be real wage rises somewhat in excess of inflation. Without a strong trade union presence, which we do not have, I really can't see that happening, most especially when the government has already indicated that it will be offering below inflation pay rises to its employees.

Then fourthly note that the optimism that it is assumed that these pay rises will deliver will encourage us all to spend, excessively, by reducing the savings ratio. I have already commented on this in another blog. I will not do so again, in detail. However, note that the expectation is against all historic trends, and so very unlikely to happen.

Finally, note that the UK is not expected to fare as well as world trade will in general. There is one obvious comment to make: Brexit has a cost. In fairness to the Office for Budget Responsibility, they recognise that in their report.

Unfortunately, for the second post in a row I have to come to the same conclusion. This budget really is based upon make-believe. The assumptions that underpin it look to be hopelessly optimistic. Nothing like the world that Rishi Sunak imagines is going to happen. Recession is much more likely.