There is a pot of £37 billion within the government’s accounts that is available to meet the cost of paying old age pension increases in accordance with the triple lock. So why is the government refusing to honour its commitment to older people?

It seems to be little known that there is a thing called the National Insurance Fund within UK government accounts. This is what the accounts of that fund say: 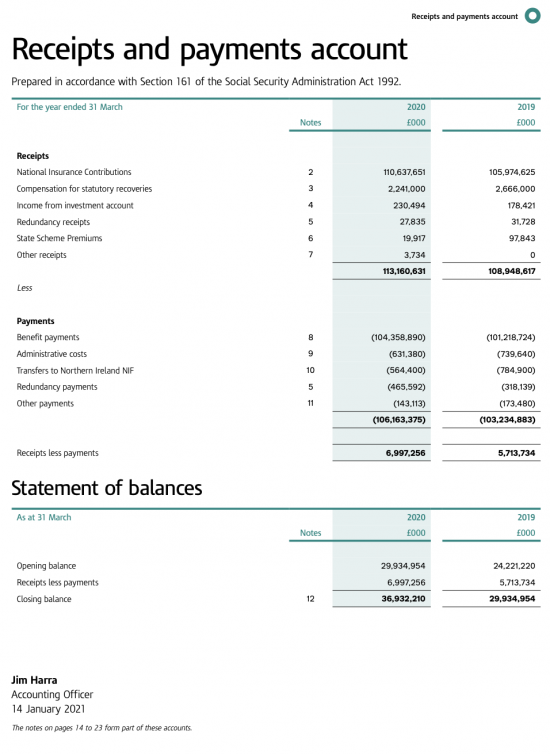 The fund accounts are certified as true and fair by the Comptroller and Auditor General, who charged £136,000 for doing so. This is despite the fact that the accounts note that:

For reasons that are not glaringly obvious it seems that around 19% of NIC contributions are paid to the NHS. Why the accounts are true and fair without this being shown is very hard to work out.

This, however, is not my concern today. That concern relates to pensions. As note 8 to the accounts makes clear this is what this fund is really all about:

What is also clear is that more is being paid into this fund than is required at present to pay pensions. There is at present a surplus of £36.9 billion on the fund account. Under the provisions of the Social Security Administration Act 1992 this surplus has to be identified and the use of these funds is ring-fenced.

Right now though the government is seeking to pass a Bill that will reduce state pensions by reducing the triple lock that has been in place since 2010, which provides that a pension increase in any year is the highest of:

Average earnings rose exceptionally in the last year. That was the consequence of the ending of furlough. As a result, the government want to suspend the triple lock. This is despite the fact that the UK state pension is just £9,350 a year. However, only four out of 10 retirees receives that sum. 2.1 million pensioners receive less than £100 a week in state pension, most of whom are women. The actual average state pension is £8,000 a year or roughly 25% of average earnings. This is the lowest among industrialised nations, with the average being around 60% in OECD countries.

Maintaining the triple lock would cost roughly £5 billion. There is £37 billion in the National Insurance Fund to cover not just that payment, but also the payment due for many years to come, and by continuing with the operation of this fund parliament acknowledges that the funds for this purpose are already set aside for it.

So why is the government refusing to pay what is due under the triple lock? Do we really want to remain at the bottom of the state pension pile and leave millions in poverty as a result? It would seem so.

Instead of paying what is literally due to pensioners, it is lending their pension fund, such as it is, to the Treasury to reduce the national debt. I am sure that they are delighted about that.

I am not. This is economic callousness in action.