We need to know which audits are not up to scratch

As the FT has noted this morning: 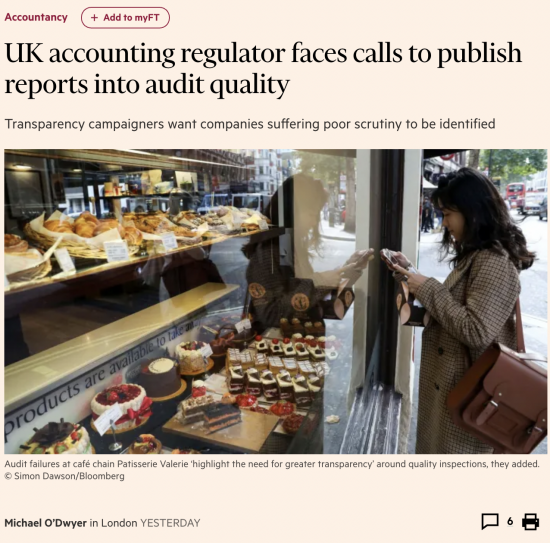 As they say in the opening paragraphs of the story:

The UK accounting regulator is under pressure to disclose the full findings of its routine inspections of large company audits to protect shareholders and other stakeholders who could lose out if financial statements are misleading.

Campaigners for increased corporate accountability said in a letter to the Financial Reporting Council that the number of audits deemed to require significant improvement was “alarming”, and that the names of companies affected by poor-quality scrutiny should be disclosed.

I was one of the signatories to that letter that the FT saw, signing as a director of the Corporate Accountability Network. This is what the letter said:

Re: 2021 Audit Quality and Inspection Reports

We the undersigned organisations and individuals who work on corporate and shareholder accountability, corporate reporting, and climate change refer to the Audit Quality and Inspection Reports published by the FRC on 23 July 2021 (the 2021 AQRs). We welcome the FRC’s publication of its findings and the frankness of its statements about the improvement needed. However, we are concerned by the lack of transparency in failing to identify the companies whose audits have not met acceptable standards and the resulting risks to confidence both in the quality of corporate reporting and audit and the operation of the market. Both these matters are key to the FRC’s role of protecting the public interest.

We are writing to ask about the FRC’s outreach to the Chair of the Audit Committees of the relevant companies and to encourage the FRC to provide additional disclosures about the audits reviewed.

The 2021 AQRs contain a number of alarming findings.  29% of the 103 audits were in need of significant improvement which the FRC acknowledges is a figure that “remains unacceptably high.” KPMG is singled out for its ‘unacceptable’ lack of improvement in particular for its audits of banks and similar entities.  These conclusions are so serious that they raise an expectation that the regulator will seek to protect users of  the relevant inadequate audits by disclosing the names of the impacted companies.

The Independent Review of the FRC called for greater transparency around AQRs. While the current BEIS consultation on audit reform confirms that the government intends to legislate to allow for AQR reports to be published without the consent of the auditor and audited entity, the government will leave to the regulator the decision as to whether it will provide complete transparency or merely summary information.

We believe that individual audits that do not meet acceptable standards must be identified with sufficient reason being given as to the basis for this conclusion. If this is not done the shareholders and other stakeholders of the company that has suffered a deficient audit service will not know that the audit on which they are relying has not met the required standard. Indeed, failing to disclose which audits are involved risks creating a general lack of confidence in all audit opinions expressed by the particular firms. Confidence in audits across the board is therefore impacted by this lack of transparency.

We believe that the audit failures at Patisserie Holdings highlight the need for greater transparency of AQRs. We understand that the FRC reviewed the company’s audit as part of the 2018/19 AQR.  However, there are no detailed disclosures about the findings of that specific review, including whether or not the FRC identified any issues with Grant Thornton’s audit which was subsequently revealed to contain “numerous breaches of relevant requirements [...], evidencing a serious lack of competence.”

We believe that the regulator must prioritise the protection of those who depend on an audit opinion over the interests of the auditors. We urge the FRC - and its successor regulator ARGA - to put in place a mechanism to ensure that issues of commercial confidentiality and legal privilege do not result in an unacceptable lack of transparency regarding deficient audits. Furthermore, failing audits cannot be allowed to provide a form of liability shielding for companies and their directors.

Given that directors bear primary responsibility for the information disclosed in company reports it is also critical that the AQRs are accompanied by engagement with the Chairs of the Audit Committee of the relevant companies to ensure that companies are aware of potentially significant issues with their financial accounts and audits and crucially that the Audit Committees work to ensure future audits are improved.

We request that the FRC:

We would like to arrange a meeting to discuss these issues further. We look forward to hearing from you.