The audit failings by Grant Thornton at Patisserie Valerie were spectacular, but are only indicative of the structural failings within the audit profession as a whole

The Financial Reporting Council report on the failings of Grant Thornton within their audit of Patisserie Valerie was issued yesterday. The report makes for grisly reading for those who care about the audit profession. A staggering level of incompetence is documented.

Although I rather strongly suspect that many of the so-called audit failures of recent years are inappropriately labelled, because their underlying cause is in the failings of the accounting standards used for the preparation of the accounts of the companies in question, in this case there was blatant fraud going on in Patisserie Valerie which the audit failed to identify over a period of at least three years.

The frauds included falsifying sales income in fashion so blatant that it should have been obvious; falsifying documentation to provide false audit evidence, with the falsification being so amateurish it should have been obvious; failing to check bank reconciliations (perhaps the most basic of all audit tests) properly, and failing to draw obvious conclusions from their obvious falsification; failing to check fixed assets properly (which looked like a pretty minor breach, overall). and failing to check year-end accounting adjustments that falsified the view given by the accounts.

That’s a staggering list of failings. Unfortunately, it’s not that staggering in the case of Grant Thornton, with regard to whom the Financial Reporting Council report notes these following additional failings in recent years, all resulting in penalties: 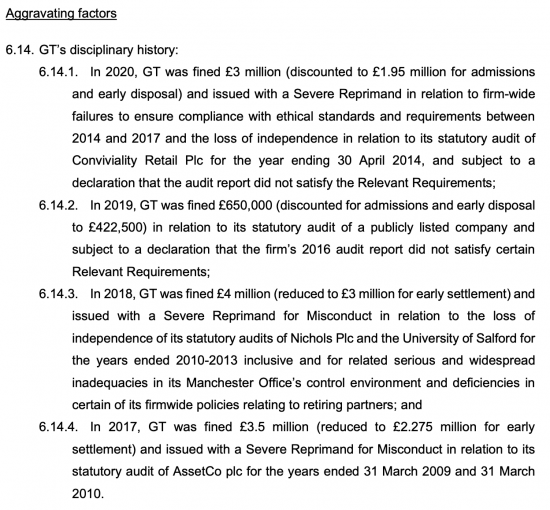 I suggest if you wish to wallow in the sordid details of this that reading the FRC report will provide a certain sort of pleasure. I am more interested in why this happened, particularly given that audit failure at Grant Thornton appears to be systemic.

The obvious reaction of an experienced auditor (and I audited for twenty years) is to be staggered that such mistakes might be made. I said so in comments to The Times made yesterday. But the obligation on an auditor is to be sceptical and to not accept evidence at face value. The duty is to ask ‘why?’ to determine whether a particular error might in fact be indicative of a systemic failing. I suggest that in this case it is very likely that it is.

What I suspect this case evidences is that Grant Thornton are using staff both too poorly trained and simultaneously inexperienced to undertake the audit work demanded of them. The audit of cash and bank is routinely delegated to very junior members of audit teams as fraud is usually considered very unlikely and so error is rare. Analytical review, which is the process of standing back to look at patterns in audit data that might indicate falsification because abnormalities are rarely very well disguised (and they were blatant at Patisserie Valerie) is frequently poorly done: those undertaking the work simply do not have the experience to do it or the courage to follow through on issues observed. In addition, journal entries are very rarely understood by audit staff who have never had the responsibility for ever preparing a set of accounts (and most Grant Thornton staff will never have done so) which means that they are usually deeply misunderstood.

What I am saying is that I think it quite possible that the audit team on this audit were inappropriately trained for the tasks they were asked to undertake. That was not their fault. It was the fault of Grant Thornton and the audit partner. It only required a less than dutifully diligent audit partner and the chance of a failed audit was easily created.

I say this for good reason. Many will say that this failure shows that there is need for audit firm reform in the UK, but I rather strongly suspect that the reform they will call for will not be what is required. The failing on display is a suspect commonplace, not just in Grant Thornton, but in many of the mass of audit failings noted by the FRC amongst the major audit firms each year.

There is an expectation that we should have cheap audits. Firms deliver them using, very largely, quite junior staff who are in their early twenties, who have almost no experience of accounting, very little on the job training, and who have never done any actual accounting because opportunity to do that is almost unknown in larger audit firms. The primary goal of these staff remains what it has been throughout their lives to date, which is to pass exams and then move on. Audit is for them little more than a ticket to a right of passage, which is qualification as an accountant and the financial rewards that brings. Their interest in audit is marginal, at best.

It is this fundamental structural failing in the supply of audit that is the real cause of audit failure. It will not be resolved without a change in the professional qualification of auditors, without a requirement that they must all know how accounts are actually prepared (because the division between accounting and auditing skills is very dangerous when it comes to delivering effective audits), and most importantly, the price of audit must increase so that people who know what they are doing can be engaged to do it.

This is not the solution being discussed anywhere in the professional right now. As a result audit failure is likely to continue.