A case of misdiagnosed founder’s syndrome

A little over a week ago The Times published an article noting that John Christensen and I had resigned our associations with the Tax Justice Network. They did not talk to either of us, but quoted from statements we had already made, in my case published here and in John’s case in his letter of resignation, which also appeared on this blog.

The Times quoted the Tax Justice Network in response. We presume the statement came from its CEO, Alex Cobham and said: 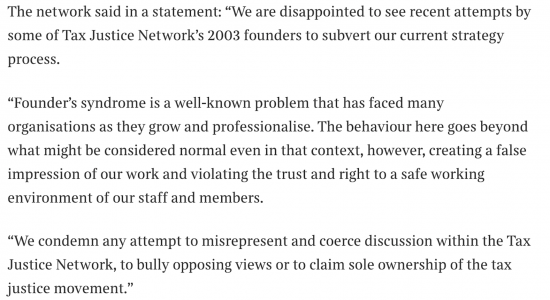 The claims made are very odd. For example, many of the problems that we have noted have arisen precisely because Alex Cobham will not engage with almost anyone who has been a senior adviser to the Tax Justice Network over time on almost any issue at all and has certainly sought to bar his staff from doing so in some cases.

The suggestion that John and I have created an unsafe working environment for TJN staff is less amusing and very obviously untrue, but when Alex seeks to differentiate the staff and members of TJN when they are the same it's hard to take any of his comments seriously.

Overall, the points made were so obviously unrelated to the issues John and I raised that neither John or I complained: when someone is shooting themselves in the foot the best thing to do is ensure they take good aim, and Alex Cobham certainly did that.

However, as I know quite a lot of academics with an interest in management related issues and one commented on what they had read, having known a little of TJN over the years (with which they have had no association of which I know) and sent me this comment, which they have authorised me to publish:

There are some reasons to be mildly sceptical about founder's syndrome as a concept, but if we give it a generous reading and work through the various indicators and supposed symptoms, it quickly becomes very obvious that virtually none of these indicators apply in this particular case. The current CEO has been CEO for five years. CEO autonomy and resources have been present. Organisational capacity, with its own staffing patterns and procedures and a very specific research agenda, have also been built and developed in that period. The founders' themselves claim that it is this process that has gone too far. For founder's syndrome to apply it usually requires the founder to still be holding the reins and shaping the trajectory of the organisation, harmfully so, and that is evidently not the case here.

In this case, the 'founder's syndrome' allegation, if it could be substantiated, would actually implicate the current CEO, given the five year tenure. For founder's syndrome to be present, the current CEO would need to have been cowed by the founder and have failed to emerge from that shadow, or to have exercised the necessary strong, independent leadership. But TJN has been refashioned in that five year period, built new funding and staffing patterns, making it seem very doubtful founder's syndrome could be said to be present on that measure.

If we consider many of the supposed symptoms of founder's syndrome: obsessive leadership style; autocratic non-transparent decision making; micromanagement; highest paid person opinion, so ideas at the top consistently win over better ones; actions without goals; - then if these are present that would require them to be a trait of the leadership style of the key office holder, - the CEO.

One of the main features of founder's syndrome is the lack of a succession plan and a failure to transition to a new management team, and a lack of organizational infrastructure. Succession took place in 2016. The allegation from founders is that there is now too much organizational infrastructure, that is impeding key goals and a sense of purpose. Again this is the very opposite of what we would expect to see in the case of founder's syndrome. So if founder's syndrome has an antonym, that is what this case seems most likely to represent. An extremity in the opposite direction.

The objection from the founding group is that TJN has moved too far, too fast, away from founding principles, strategies and logics. Founder's syndrome generally applies to an organisation, caused by the controlling behaviour of an individual who remains in position, but the founder has been a couple of steps removed from day to day decision making for five years, on matters such as staffing, budgets, research outputs. Clearly the organisation itself cannot suffer from founder's syndrome in such a context.

So maybe the nature of the claim is instead that the individuals in the founder's group are guilty of founder's syndrome? However, the individual properties of founder's syndrome cannot be seen in the founders' group. These individuals consciously stepped away, acknowledging the importance of a succession plan and put themselves at one step removed from day to day decision making. Moreover, they have now resigned as advisors and sought to put further distance between themselves and the TJN.

On every measure therefore, it seems the exact opposite of what we expect to see under a situation of founder's syndrome is present. Claiming founder's syndrome is the equivalent of arguing black is white in this case. The claim seems to be based on limited grasp of what founder's syndrome would involve, or imply. For a CEO who has been running their organisation for five years, to make that claim shows a lack of awareness of what that claim would imply for their own leadership. So in many respects, this looks like a remarkably flawed and contradictory claim. A rather lame attempt at deflection. For a CEO to make the claim five years in, after essentially building an organisation in their own image is laughable.”

I think I need add very little. I would much rather none of these issues had needed to be drawn to public attention, but eventually John and I, for differing but related reasons, felt we had no choice but to disassociate with TJN because we now consider it is doing more harm than good when it comes to tax justice-related issues. The colleague who reviewed the comments made by Alex Cobham to The Times agreed. But what their analysis suggests is that this is not an issue that can be laid at the door of what that commentator calls the ‘founding group’ (otherwise called John Christensen and me) and can instead, on the basis of Alex Cobham’s own analysis provided to The Times and on its blog be laid firmly at his door, rather as John and I have suggested.

I’d suggest it is time for Alex Cobham to stop the ad hominem and unfounded abuse and sort out the mess he has created. I’d like to think he might because it would be good for everyone if he now did so, and even started engaging with his critics, but I am not optimistic, and that is the real shame of all this.